Creationist “Researcher” tells Duggar-in-Law: “There Really is No Such Thing as an Atheist” May 13, 2015 Hemant Mehta

Creationist “Researcher” tells Duggar-in-Law: “There Really is No Such Thing as an Atheist”

Jessa Seewald, the child of the Duggars whose marriage last year was featured on 19 Kids and Counting, recently went to the Institute for Creation Research in Texas with her husband Ben. And since there was no actual research to discuss and the Institute’s library only has one book in it, Ben sat with Dr. Jason Lisle and asked how the Director of Research would prove to atheists that God exists: 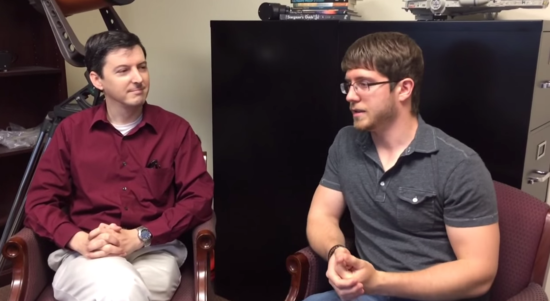 Lisle’s response was precisely what you’d expect from someone who thinks science works by assuming the Bible is literally true.

The evidence of God is ubiquitous. It’s everywhere. And, in fact, Romans 1 tells us that God has revealed himself to everyone. And what that means is there really is no such thing as an atheist. There are those people who profess to be atheists, but in their heart of hearts, they know that there’s God because God has revealed himself to everyone. He’s hardwired us to know that he exists. And he’s hardwired us in such a way that when we look into the universe, we immediately recognize it’s the handiwork of God. And not just a god, the God. We recognize God.

Well, I’m convinced. God exists because we all just know God exists. And it’s totally the Christian God because He wrote a book that says He exists and no other religion has ever done that exact same thing. It all makes sense now.

Ben summarized the conversation with this stunner:

I know there is a lot of… scientific evidence — we are here at the Institute for Creation Research — and there is a lot of, really, all science, it just points to the validation of the Genesis account.

Don’t you love that? There’s a lot of scientific evidence pointing to Genesis… because the place is called the “Institute for Creation Research” and therefore the evidence has to be there or else the place wouldn’t exist.

It’s that sort of logic that led to the naming of the Creation Museum, even though it’s not a museum. (Nobody tell Ben that Pizza Hut isn’t really a hut and Burger King isn’t actually royalty.)

Jessa, who blamed evolution for the Holocaust last year, appears nowhere in the video. Not even her voice. You can take a wild guess as to why that is.

And if all of that depresses you, just remember: These people are inevitably going to have about seven times the number of children you have.

May 13, 2015 Judge Orders School District Teaching Abstinence-Only Sex Ed to Pay Parents Who Forced Them to Stop
Browse Our Archives
What Are Your Thoughts?leave a comment