The Regnerus Gay Parenting Study Is Even More Flawed Than We Thought May 12, 2015 Camille Beredjick

As they gear up for legal battles nationwide, anti-LGBT activists’ weapon of choice is the infamous “Regnerus study,” a report by University of Texas sociologist Mark Regnerus that claimed to “prove” same-sex parenting is inherently harmful to children. The study has been thoroughly debunked as methodologically and ethically flawed, and experts far and wide — including Regnerus’ own university — have said they want no affiliation with it.

We thought we’d seen it all, but nope — two sociologists are taking another crack at determining the study’s scientific validity (or lack thereof), and what they’re finding is even more absurd than the fallacies we were already aware of.

Indiana University’s Brian Powell and the University of Connecticut’s Simon Cheng actually redid the study for Social Science Research, the same journal that published the original article. Not surprisingly, when they used proper methodology and eliminated “suspect data” — see below for a laughable example — they found that kids fare just as well when raised by a same-sex couple as by a mom and dad. 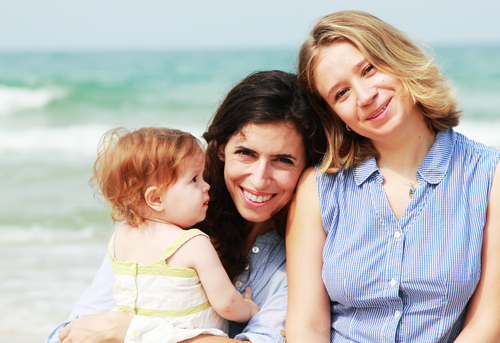 By eliminating suspect data — for example, a 25-year-old respondent who claimed to be 7’8″ tall, 88 pounds, married 8 times and with 8 children, and another who reported having been arrested at age 1 — and correcting what they view as Regnerus’ methodological errors, Cheng and Powell found that Regnerus’ conclusions were so “fragile” that his data could just as easily show that children raised by gay and lesbian parents don’t face negative adult outcomes.

“[W]hen equally plausible and, in our view, preferred methodological decisions are used,” they wrote, “a different conclusion emerges: adult children who lived with same-sex parents show comparable outcome profiles to those from other family types, including intact biological families.”

In his original study, Regnerus claimed adults who had been raised by gay or lesbian parents were more likely to have depression, abuse drugs, engage in criminal behavior, and acquire STDs, as well as have a higher likelihood of having experienced childhood sexual abuse. Regnerus and others have used these findings to testify against marriage equality, but a more detailed look at the study shows that he hardly spoke to any children of same-sex parents at all:

The Regnerus study was promptly scrutinized by fellow social scientists, who pointed out major flaws in his methodology. Many people who he categorized as having been raised by a gay or lesbian parent had spent very little time with that parent or with his or her same-sex partner. Even Regnerus admitted that his data included only two people who said they had been raised for their entire childhoods by a same-sex couple.

After correcting the research methods, Cheng and Powell found only three statistically significant differences between “the respondents raised by a lesbian mother and those who reported having been raised in ‘intact biological family’ households.” And of these, only one could be considered a “negative adult outcome,” as Regnerus sought to put it: respondents with gay parents were more likely to have had an affair. On this point, Powell adds:

Even that is hardly a smoking gun, says Powell: “If you study 40 different variables or outcomes… just by the law of chance, a few of them should be statistically significant.”

Same-sex families play a more important role in the political landscape than ever, and the research is as clear as ever, too: what matters is that kids have loving and supportive parents, regardless of their gender. If Regnerus’ flop of a study is all conservatives have to defend their cause, that can only be good news for marriage equality, nondiscrimination protections, adoption rights, and the other issues that are certain to strengthen families, not weaken them.