Allen West’s Exposé on Religious Discrimination at Walmart Fails Even the Simplest Fact-Checking May 12, 2015 Rachel Ford

On Sunday, former Congressman Allen West uncovered a really worrying example of Christian persecution in Dallas — an “ominous” sign, in fact. As West told it, a local Walmart seemed to be allowing a Muslim employee to refuse service for religious reasons, with no one objecting — while the Christian-hating government persecutes Christians for doing the same kind of thing: 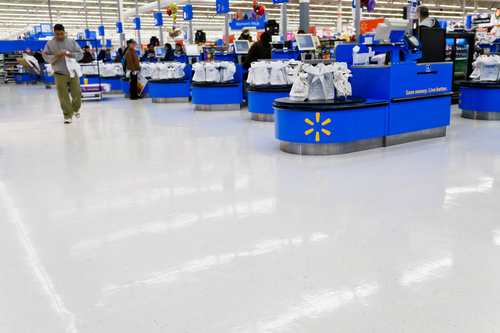 There was a young man doing the checkout and another Walmart employee came over and put up a sign, “No alcohol products in this lane.” So being the inquisitive fella I am, I used my additional set of eyes — glasses — to see the young checkout man’s name. Let me just say it was NOT “Steve.”

Apparently based solely on the young man’s name, the intrepid West ascertained this employee’s religious beliefs. And, obviously, the only reason that alcoholic products couldn’t go through Not-Steve’s lane was that Walmart was pandering to Islam, Sharia law has been declared, and Christians are under threat:

Imagine that, this employee at Walmart refused to just scan a bottle or container of an alcoholic beverage — and that is acceptable. A Christian business owner declines to participate or provide service to a specific event — a gay wedding — which contradicts their faith, and the State crushes them.

Unfortunately for West, this tale of persecution fails one crucial test:

Aside from the fact that Walmart wasn’t refusing service (you could still presumably purchase alcohol the next checkout lane over), the sign wasn’t an effort to accommodate the worker’s religious beliefs at all.

In an editor’s note posted after the article’s publication, West explains:

We spoke to the Walmart store, and apparently employees under 21 years old are prohibited from selling cigarettes and alcohol. However, that isn’t to say Walmart isn’t selectively caving to Muslim demands, such as this case regarding Halal meat in Ohio.

Like any classic non-apology, this sort of “I was technically wrong, but still right” correction is not particularly impressive. But with yet another Christian persecution narrative going down in flames, I guess conservatives will have to keep looking. Proving that the government and President Obama (“surely an Islamist sympathizer”) are applying a double-standard, persecuting Christians while allowing Muslims to discriminate, is turning out to be about as easy as finding Bigfoot.

May 12, 2015
Why Getting Rid of Church/State Separation Could Be Great for Atheists
Next Post