Jeb Bush to Liberty University Graduates: Of Course My Christian Faith Dictates How I Govern May 11, 2015 Hemant Mehta

Jeb Bush to Liberty University Graduates: Of Course My Christian Faith Dictates How I Govern

Yesterday, Jeb Bush, the Republican who’s supposed to be one of the more moderate candidates for the party’s Presidential nomination, gave the commencement address at the late Jerry Falwell‘s Liberty University and told the audience that the separation of church and state would be an afterthought if he were elected. 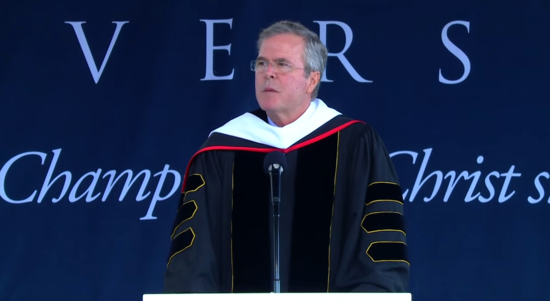 … I am asked sometimes whether I would ever allow my decisions in government to be influenced by my Christian faith. Whenever I hear this, I know what they want me to say. The simple and safe reply is, “No. Never. Of course not.” If the game is political correctness, that’s the answer that moves you to the next round. The endpoint is a certain kind of politician we’ve all heard before — the guy whose moral convictions are so private, so deeply personal, that he even refuses to impose them on himself.

Somebody here is being small-minded and intolerant, and it sure isn’t the nuns, ministers, and laymen and women who ask only to live and practice their faith. Federal authorities are demanding obedience, in complete disregard of religious conscience — and in a free society, the answer is no.

Somehow, Bush doesn’t understand that governing by faith over the Constitution is precisely how you win the GOP nomination. In a better society, supporting the separation of church and state would be a given, and anything to the contrary would be political suicide. That’s not the society we live in. Bush is only the latest in a long line of conservative politicians to tell a Christian audience that their faith (not evidence, not science, not common sense) would guide policy decisions.

Keep in mind those “nuns, ministers, and laymen and women” are the only ones demanding that everyone else bow down to their religious whims. When gay marriage is legalized, they won’t be forced to perform same-sex ceremonies in their churches. What they want, though, is for LGBT Americans to be denied the rights that they freely enjoy. Only one side is being intolerant and it’s not the side fighting for equal rights.

If you thought Jeb Bush would be any different from his brother, here’s your indication that we’d be getting more of the same.

David Badash at The New Civil Rights Movement reminds us that, when John F. Kennedy was running for President, he made a speech in which he said, “I believe in an America where the separation of church and state is absolute.” Kennedy also spoke of his wish to end religious intolerance. Those things aren’t mutually exclusive… unless you’re part of the Religious Right. We’re a long way gone from those days.

Bush provided at least a bit of lip service to non-Christians at the end of his speech:

In my experience, you generally find the same good instincts, fair-mindedness, and easy-going spirit among Americans of every type, including, of course, the many who belong to no church at all.

I’m pretty sure the next line was: That’s why we must crush them.

You know, you would think someone trying to position himself as the Republican moderate who can win over independent voters would try to avoid following in Ted Cruz‘s footsteps by speaking at a fundamentalist Christian school. As much as I want this to hurt his chances of winning the nomination, he’ll probably see a rise in poll numbers over the next few days.

May 11, 2015
Would Christians Want to Live in a Country Run by the Biblical God?
Next Post