On Friday, during the high school graduation ceremony for TNT Academy, a private school just outside of Atlanta, founder/director Nancy Gordeuk accidentally dismissed the crowd earlier than expected. So as a student was trying to give a speech, there were people walking out of the ceremony. It pissed off Gordeuk, who began reprimanding the crowd from the stage, but then it took a really ugly turn when she said, “Look who’s leaving, all the black people.” 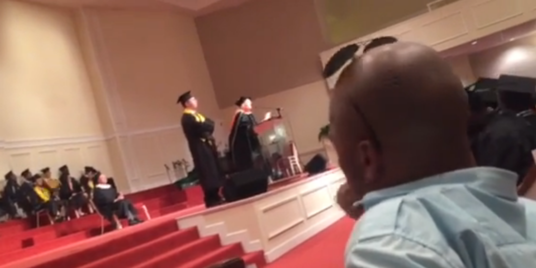 For some reason, that frustration-fueled-Kramer-like racist remark didn’t go over so well with the crowd…

But that’s not the only reason I’m posting this.

In an apology email to parents, Gordeuk lay the blame for her comments on… Satan:

“A terrible mistake on my part of the graduation ceremony on Friday night,” Gordeuk wrote [in an email]. “The devil was in the house and came out from my mouth. I deeply apologize for my racist comment and hope that forgiveness in [sic] in your hearts.”

This is what I hate about the Christian concept of Satan. Instead of taking full responsibility for her actions, Gordeuk pinned her statement on an imaginary figure who somehow “forced” her to say the words against her will. Bullshit. She chose to say those words.

Whatever her email said, that line shouldn’t have been in there. It detracts from the full mea culpa she owed everyone who’s a part of that school.

Even without the racist statement, by the way, you can see from the video that Gordeuk was already ruining the ceremony for all the families there. I know what she was trying to do, and I get why she was upset, but her inability to defuse the situation in a calm way makes me question how she manages to run a school. When you add racism on top of that, how on earth could she even think about coming back next year?

May 10, 2015 Sen. Chris Coons' Excellent Speech to Atheists in Washington, D.C.
Browse Our Archives
What Are Your Thoughts?leave a comment