Christians have put up giant crosses so often, you have to wonder what they’re compensating for. 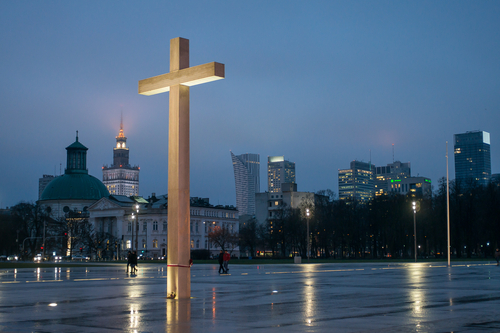 So it’s entertaining to see a Christian flip out over a Hindu man’s relatively modest 6.4-meter-tall statue of Shiva on his own property:

Ravin Chand told the Herald on Sunday that he installed the 30-tonne religious effigy so that he and his family could pray to it.

But neighbour Bryce Watts, a Catholic, said the marble statue was “bizarre” and “offensive”.

“Religiously and culturally it’s a bit insensitive to us and I can’t believe they’re able to do this. Part of our property looks at it and it’s part of a religion we don’t agree with,” he said.

“I don’t see why we should have it poked down our throats in such a big way.”

Yeah… It is annoying, isn’t it? How dare other people practice their faith however they want in a way that doesn’t effect the rest of us?

Chand said Watts had phoned his wife – but was the only person to complain. “Everybody else who has gone past has stopped and admired it,” he said.

“[Watts] compared it with ‘me putting up a [Nazi] swastika next door to you’. I said, ‘Well if you want to put it up, feel free to put it up. Nobody can stop you from doing that, it’s your property.’

It never gets old listening to Christians like this complain about other people doing practically the same thing they’ve been doing for years. They have no ability to see things from a different perspective.

(Image via HUANG Zheng / Shutterstock.com. Thanks to Dave for the link)

May 10, 2015
Conservative Christian Comedian Doesn't Realize His Critique of Islam Also Applies to His Own Faith
Next Post

May 10, 2015 High School Principal Blames Satan for Her Racist Remarks at Graduation Ceremony
Browse Our Archives
What Are Your Thoughts?leave a comment