On Real Time with Bill Maher, the Panelists Debated the Free Speech Aspect of Drawing Muhammad Cartoons May 9, 2015 Hemant Mehta

It was refreshing to hear Bill Maher and a couple of his Real Time panelists speak in defense of the Muhammad-drawing cartoonists last night: 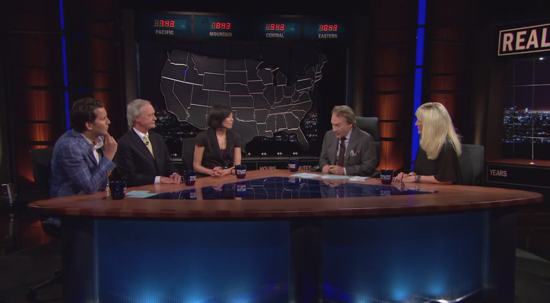 Maher made a point we don’t often hear in the media when he challenged Garry Trudeau‘s position:

Can I read what Garry Trudeau said? Because he’s on the side of the writers who are protesting giving Charlie Hebdo a courage award. He said this a couple of weeks ago. He said Charlie Hebdo was “punching downward, by attacking a powerless, disenfranchised minority with crude, vulgar drawings… Charlie wandered into the realm of hate speech, which in France is only illegal if it directly incites violence… Well, voila — the 7 million copies that were published following the killings did exactly that, triggering violent protests across the Muslim world…”

So this assumes that we just have to accept that Muslims are unable to control themselves the way we would ask everyone else in the world. To me, that’s bigotry. That’s the soft bigotry of low expectations.

It absolutely is, and we know there are Muslims who defend free speech. I just wish they would be more vocal about it.

When former Rhode Island Governor Lincoln Chafee argued that the cartoonists needed to tamp down the rhetoric, presumably by not drawing offensive images, he was rightfully challenged on it. And that stance alone should give pause to anyone who thinks he would represent a more left-wing candidate for Democrats in the upcoming elections.

I was also surprised to hear MSNBC’s Alex Wagner remark, “Isn’t the whole point of free speech to not judge people based on what they’re saying?” (Panelist Will Cain immediately shot back with, “That’s definitely not the role of free speech. You judge. You just don’t censor.” Perfect.)

You can’t reason with them because extremist religious beliefs don’t change with logic. Another alternative is for more people to draw the images and simply overwhelm them since they can’t lash out at everybody… but unless everyone joins in, we can’t even test that theory, and many are understandably reluctant to participate.

Another option is to support those moderates who have a better chance of getting through to fellow Muslims, the ones who might be able to help them understand the free speech issue and reinterpret the Qur’an in a more peaceful way. Maher expressed his support for that option, saying we have to be on the side of Muslims “who want to live in the 21st century instead of making excuses for the ones who want to live in the 7th.”

Couldn’t agree more. It’s a point Ayaan Hirsi Ali has made many times before, too.

Too bad the panelist who made the least sense on the issue is the only one considering a run for President.

May 9, 2015
What Happens When Atheists Stop Being in the Minority?
Next Post

May 9, 2015 Daniel Dennett Withdraws from World Science Festival Due to Templeton Foundation Sponsorship
Browse Our Archives
What Are Your Thoughts?leave a comment