Last month, I wrote about the Louisiana Science Education Act, which is the act allowing Creationism to sneak into the schools under the guise of “teaching the controversy”… even though no such controversy exists in the world of science.

LSEA needs to be repealed, and Senate Bill 74 could do it.

On April 22, a hearing was held on that bill. And just wait until you hear how the ignorance-spewing State Senator Elbert Guillory defending the teaching of Creationism in public schools. 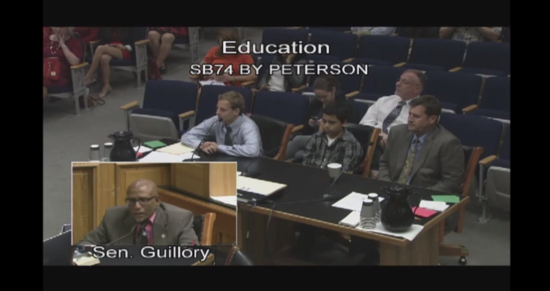 Guillory brought up scientific controversies from the past in order to make a point and, in the process, he flipped the script of history.

There was a time, sir, when scientists thought that the world was flat. And if you get to the end of it, you’d fall off.

There was another time when scientists thought that the sun revolved around the world.

And they always thought to ensure that anyone who disagreed with their science was a heretic! People were burned for not believing that the world was flat. People were really badly treated.

My point, sir, is that not everyone knows everything. And, in a school, there should be an open exchange of ideas. Knowledge only grows when people can talk about and have this intellectual back-and-forth, this discourse, with all ideas on the table. To restrict ideas is against knowledge and it’s against education. Therefore, at the appropriate time, Mr. Chairman, I move that this bill be involuntarily deferred.

So there you have it. When we were debating whether or not the Earth revolves around the Sun, it was the scientists who burned dissenters at the stake! Who knew?!

After a brief interlude from activist Zack Kopplin — who correctly points out that no one is teaching the “controversy” that 1 + 1 = 3 — Sen. Jean-Paul J. Morrell offered a polite rebuttal to his colleague:

Just a quick addendum to my good friend Sen. Guillory’s comments. Actually, you talk about the world being flat and not the center of the universe? [It was] Galileo and it was the Church that locked him up for nine years for advocating that theory.

So, although I appreciate your comments about [how] there are alternative theories, when you look at history, oftentimes, when science pushes the envelope, the leading person to lock that person up, is oftentimes religious leaders. And, at the end of the day, I think when you talk about a fair exchange of ideas, as long as those ideas are based in fact, I think you really don’t have a problem. At the end of the day, we want to have a logical discourse about things that are provable.

I want to say a quick quote that I’ve been saving for this measure. It’s from Neil deGrasse Tyson, who I’m sure many of you are familiar with: The good thing about science is that it’s true whether you believe in it or not.

And with that, I make a substitute motion to report the bill favorably.

As Morrell spoke, you can see the panelists (and audience) nodding and smiling in delight — because you know they were all thinking the same damn thing.

This isn’t the first time Guillory has said something idiotic regarding science.

… Guillory explained that he wouldn’t want to keep the “science” behind an experience he had with a witch doctor — who “wore no shoes, was semi-clothed, used a lot of bones that he threw around” — out of a public school science classroom.

And he’s one of the people who will get to decide the fate of what kids learn in their public school science classes.

By the way, SB 74 was ultimately deferred on a 4-3 vote, effectively tabling further discussion on it.

May 8, 2015 Christian Right Leader: LGBT Rights Supporters Are Just Like ISIS
Browse Our Archives
What Are Your Thoughts?leave a comment