In Real-Life Version of God’s Not Dead, Atheist Professor Accused of Failing Student for Being Christian May 7, 2015 Hemant Mehta

In Real-Life Version of God’s Not Dead, Atheist Professor Accused of Failing Student for Being Christian

We hear a lot of stories of Christian teachers foisting their beliefs on public school students, and virtually none where the roles are flipped. Since when does an atheist professor ever punish a Christian student for believing in God?

Never! The only place you ever see that is in God’s Not Dead and we all laughed at that movie because of how far-fetched the plot was. 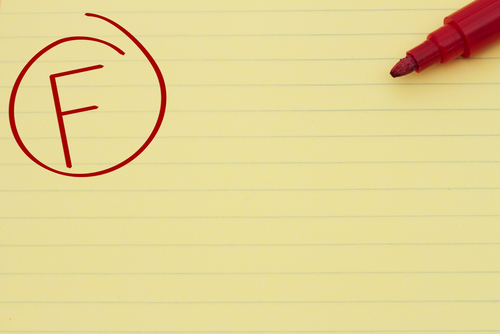 According to a press release from Christian Right group Liberty Counsel:

[Student] G.L. and her parents reached out to Liberty Counsel when [Professor Lance “Lj”] Russum gave her four (4) straight zeros because she refused to conform to his personal worldviews of Marxism, Atheism or “Anti-theism”, Feminism, and homosexuality. Professor Russum expressed blatant and pervasive anti-Christian bias throughout the class, such as the following essay question: “Why did Christianity, and its male gods, seek to silence these women [the nuns]?”

In other essays where G.L. refused to concede that Christianity was false, violent, or oppressive to women; that Martin Luther’s motivations for the Reformation were wholly secular; and that Michalengelo’s sculptures and paintings communicated that “same-sex relationship is NOT A SIN,” Mr. Russum gave her a total of four straight zeros.

Lots of allegations there, so let’s step back for a second and start at the beginning.

G.L. is a 16-year-old high school student who’s taking a college class for dual credit. (A lot of high schools offer this option. It’s a nice way to get college credit for intro-level classes without having to take an Advanced Placement test.)

This semester, she took Introduction to Humanities (HUM 2020) with Professor Russum. The syllabus for the course states:

You are under no obligation to agree with classmates, authors, or the instructor, in fact, the instructor will often occupy the space of “Devil’s Advocate” for the purpose of lively discussion.

But then we get to the assignments.

Keep in mind that we don’t have the original documents, only the student’s responses to them, which restate his instructions. (I have no reason to doubt her on that matter, by the way. Just putting that out there.) 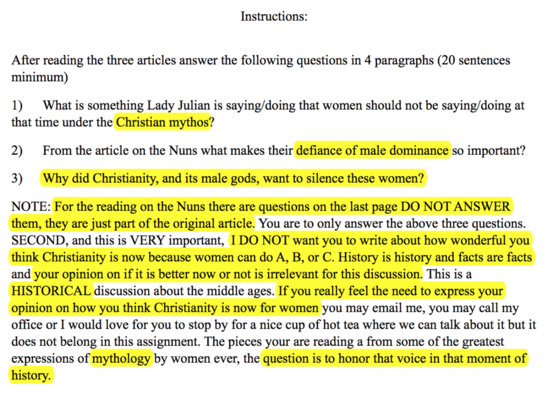 You can see the professor’s references to “Christian mythos,” an instruction reading “I DO NOT want you to write about how wonderful you think Christianity is now because women can do A, B, or C,” and the question “Why did Christianity, and its male gods [sic], want to silence these women?”

It’s a lot of the professor’s opinion mixed in with his questions.

I won’t bother to judge the student’s answers because, frankly, they’re irrelevant to this discussion. Did she inject her beliefs despite being told not to? Absolutely. Repeatedly. But the argument that she didn’t follow instructions would carry a lot more weight with me if the instructions and instructor were unbiased to begin with.

The other homework assignments proceed along the same lines. The professor freely tosses around his anti-religious beliefs and the students are expected to nod their heads.

It’s not that I disagree with him. It’s that I cringe at the thought of an Intro to Philosophy professor who doesn’t allow room for dissenting opinions — or at least makes it very uncomfortable for students to offer an opposing viewpoint. It goes against the very nature of the course.

After getting these zero-grades on all four assignments, the student’s parents wrote an email to Donald Painter, Jr., the Dean of Academic Affairs expressing their concerns. Painter wrote back:

I appreciate your concern for your daughter’s education and the quality of our academic offerings. I too take academic quality and rigor very seriously. I have reviewed the materials in Professor Russum’s… course and believe them to be appropriate based on the course description and learning outcomes. Further, I found nothing derogatory or defamatory toward any group of people.

Seriously? Were we reading the same documents?

There’s a little more to this story but that’s the gist of it. Liberty Counsel also pointed out that Russum’s Facebook page (now inactive) had obscene pictures on it — like Jesus giving a middle finger — but that’s a red herring. What he posts on Facebook shouldn’t matter. What he does in class, however, is very relevant. And it doesn’t look like he’s an objective educator.

So what are the Christians seeking?

Liberty Counsel has demanded (1) a full and independent review of Mr. Russum’s behavior and course content; (2) appropriate grading of G.L’s four “zero” assignments by a different professor; (3) a written apology; and (4) assurances that future courses taught by Mr. Russum, if any, will be free from such unlawful discrimination.

I have to say: Based on what I’ve seen and read, those are perfectly appropriate demands.

The only thing I can say in Russum’s defense is that we haven’t heard his side of the story. It’s hard to imagine all of this information is somehow painting a completely unfair picture, but that’s for the school to decide once they’ve done a thorough review.

I reached out to Russum yesterday afternoon to ask for his side of the story. As of this writing, he hasn’t written back.

Assuming what Liberty Counsel is saying is true — and I know that’s hard to accept — I share their frustration. Even as an atheist, I would feel uncomfortable in this class. Still, it’s only fair to wait until an investigation is complete.

1) The student received an A in the class regardless of her failed assignments.

2) Polk State’s lawyers have dismissed any charges of wrongdoing:

“The overall fallacy of your position rests singly on the premise that an instructor should not require a student to consider, discuss or present arguments that are contrary to his/her personal beliefs,” said the letter from the law firm, Boswell and Dunlap of Bartow, that is representing Polk State. “Such a position shows apparent ignorance of long-standing academic practice.”

***Update 2***: The full response from the school is here. A few points worth mentioning:

1) The student took the class online and the 4 assignments were part of 15 overall.

2) Other professors looked at the student’s assignments and agreed she did not do what was required. In other words, they felt the 0% grades were justified.

3) The school justifies Russum’s rhetoric by saying he was clear that he would be challenging students’ beliefs.

4) The school doesn’t give a damn about his Facebook page, as well they shouldn’t.

5) The student self-plagiarized parts of her assignment, taking something she wrote one week and using it the next.

6) Most importantly, the school provides correspondence between Russum and the student. They show a much more empathetic portrait of the professor than Liberty Counsel suggested. He explains to the student what she’s doing wrong and why it’s wrong. It’s a bit dismissive of the student, alleging that she’s in no position to challenge these scholars she’s writing about, but it makes very clear that she will not be punished for her beliefs. She simply has to address the ideas discussed in class and in the text, and she’s not doing any of that.

After reading that, I’m much more on the professor’s side than I was earlier. I still have problems with the way he’s expressing himself through his syllabus and assignment instructions. I think it makes for an uncomfortable learning experience for students who might disagree with him.

But it’s hard to look at all of this, in full, and say the professor has it out for Christians. That evidence just doesn’t seem to be there and Liberty Counsel is selective in what they’re presenting as evidence.

May 7, 2015
Judge Dismisses Nebraska Woman's Lawsuit Against All Homosexuals
Next Post