There’s a rule when it comes to signs on the sides of the road in Oklahoma: They can’t exceed a certain square footage or else the state gets in trouble.

But state officials have tried to sidestep that law for a while now. Over the past decade, they’ve asked the federal government for exemptions on the size rule when it comes to non-profit groups, including churches. (So really, this has always been about churches.) 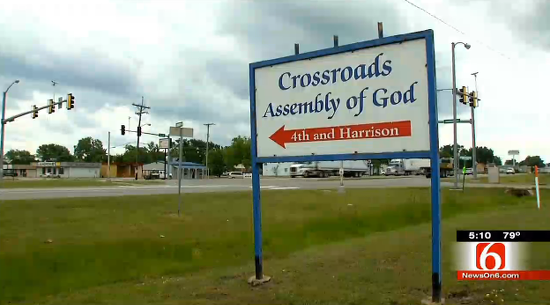 They even passed a law a few years ago allowing non-profits (so… churches) to post bigger signs on the side of the road.

Now the government is clamping down on this overreach:

A year ago the Federal Highway Administration denied [Oklahoma Department of Transportation’s] request [for larger signs] because it did not comply with the Highway Beautification Act. If Oklahoma doesn’t follow the rules, the state could lose federal highway funding.

You know where I’m going with this…

This isn’t about religion. This is about preventing highways across the country from looking like Times Square every step of the way. The government isn’t singling out churches at all. Their rule applies across the board.

More importantly, nobody is saying churches can’t post signs on the side of the road. They just can’t be excessively large. In other words, churches have to play by the same rules as everybody else… and you know how much religious people hate that.

No they don’t! They want freakishly large signs removed. Doesn’t matter who’s putting it up.

How’s that for editorializing in the headline?

(Thanks to Beau for the link)

May 7, 2015
Ben Carson: I Aced My College Chemistry Final Because God Gave Me All the Answers in a Dream
Next Post