Ben Carson: I Aced My College Chemistry Final Because God Gave Me All the Answers in a Dream May 7, 2015 Hemant Mehta

Ben Carson: I Aced My College Chemistry Final Because God Gave Me All the Answers in a Dream

Earlier today, at the official National Day of Prayer breakfast in Washington, D.C., GOP Presidential candidate Ben Carson — a neurosurgeon by trade — explained how he passed his chemistry final during his first semester at Yale University: 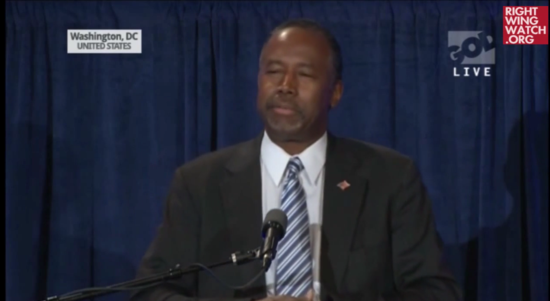 … My grades were so bad that, even if I had gotten an A on the final, I still would’ve failed. That’s how bad it was. But the professor was either very compassionate or very sadistic. I’m not sure which one. Because he had a rule. He said, “Anyone who’s failing, I’ll give them double credit on their final!” So you had, like, that one last burst of hope before you went down.

So there I was, night before, thinking about my life. I said, Lord, medicine is the only thing I ever wanted to do. I always thought that’s what you wanted from me. And yet, it looks like I’m gonna fail chemistry. I’m not gonna go to medical school.

I said, would you please tell me what it is you really want me to do? Or, alternatively and preferably, work a miracle?

I picked up that big chemistry book. I was gonna learn the whole thing that night. And, of course, I fell asleep. Dreamed I was in this large auditorium, just me and a nebulous figure working out chemistry problems.

And I awakened early that morning. That dream was so vivid in my mind. I picked up my book. I started looking up the stuff I dreamed about. And when I went to take the test the next morning, it was like “The Twilight Zone.” I opened that book and I recognized the first problem as one of the ones I dreamed about. And the next, and the next, and the next, and I aced the exam and, you know, got a good mark in chemistry. It worked out okay. And I promised the Lord he would never have to do that for me again.

Amazing isn’t it? God will give Carson all the answers to a final in a dream… and yet Carson has no idea that he’s going to lose the Republican nomination by a landslide.

That God sure works in mysterious ways.

On a side note, it would be great to see a reporter track down his Yale chemistry professor and find out if that double-credit-on-the-final policy was actually legit. We know how Christians love exaggerating their Godly anecdotes.

May 7, 2015
Pregnant, Unwed Church Daycare Worker Receives Payout After Being Fired by Hypocrites
Next Post

May 7, 2015 Feds Want Large Signs Gone from Oklahoma Highways. Somehow, That's an Attack on Religious Freedom
Browse Our Archives
What Are Your Thoughts?leave a comment