People don’t like death. They fear it. They’ll do anything they can to avoid thinking about it.

It’s one of the reasons religion is so powerful. Because you never really die when there’s a wonderful afterlife awaiting you… Religion, in many ways, functions as a defense mechanism against fear of death.

And according to new research published in the journal Social Psychological and Personality Science, the fear of death contributes to distrust of atheists, since we pop that bubble of hope.

Researchers Corey L. Cook, Florette Cohen, and Sheldon Solomon set out to find how strong that link really is:

… we propose that atheists — who dispute the existence of God and proclaim disbelief in a literal afterlife — pose a profound existential threat to those who adhere to traditional theistic cultural worldviews.

So how did they do it?

Experiment 1: They split up 202 students (none of whom were atheists). Half of them were asked to “describe the emotions” they felt at the thought of death. The rest had to write down what they thought would happen to them physically when they died.

They were all eventually asked to describe their feelings toward Quakers (considered a neutral group) and atheists (atheists!)… the higher the number, the more you liked them, and atheists received a lower score from both groups: 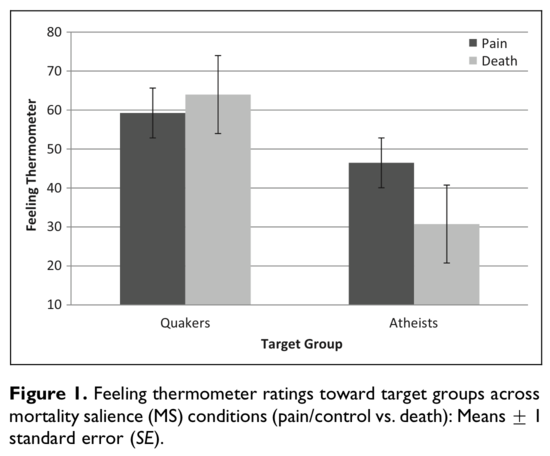 They were also asked to rate statements (such as “I would like for a member of this group to marry into my family”) somewhere on a scale between “strongly agree” and “strongly disagree.” The higher the number, the more you wanted nothing to do with the group. And wouldn’t you know it, atheists received higher scores from both groups: 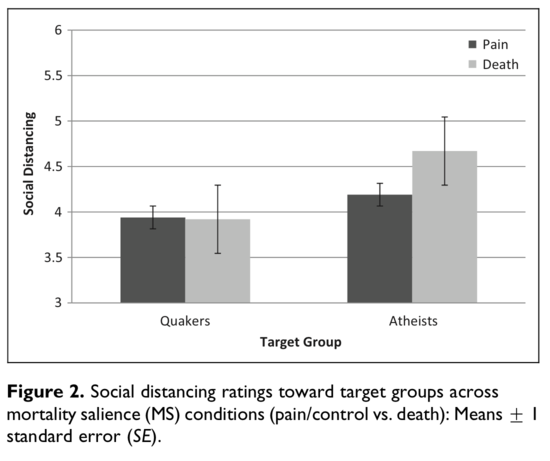 The same thing happened with statements regarding distrust. The higher the number, the less you trusted the group. And atheists came out on top once again: 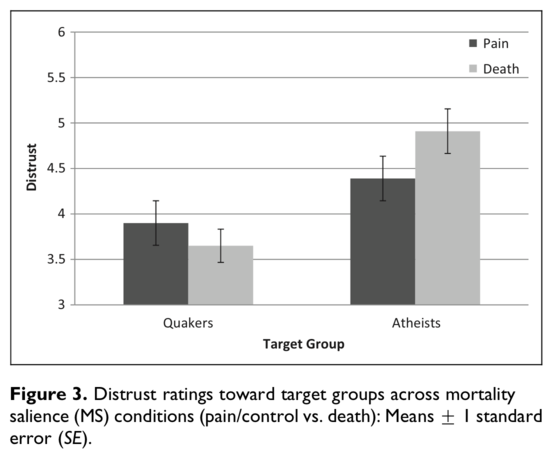 So… um… that sucks. And it offers more evidence that, compared to religious groups, atheists are more distrusted, less liked, and generally perceived as outcasts.

Experiment 2: They asked 174 students (none of whom were atheists) to “think about atheism, their own death, or experiencing intense pain.” Afterwards those students were asked to fill in the blanks for a set of words, some of which could be death-related.

With the “intense pain” group used as control, turns out thinking about atheism made you as likely to fill in death-related words as thinking about death itself! 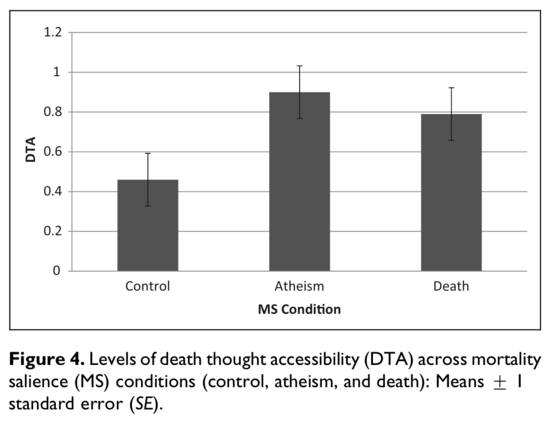 (I know the atheism bar is a little higher than the death bar in that chart, but the difference isn’t statistically significant.)

What do we learn from that?

… just thinking about atheism increased implicit death thought accessibility to the same level as [thinking about death itself]. These findings complement existing research and extend our understanding of anti-atheist sentiments by showing that hostility toward and mistrust of atheists is particularly pronounced when existential concerns are aroused and that, for believers, the mere contemplation of atheism can arouse intimations of mortality.

Given that groups that threaten worldview beliefs are often responded to with increased discrimination and aggression…, future research could be productively directed toward identifying benign ways to parry the existential threat that atheists pose to believers, thus mitigating the hostility and intolerance that they are often subjected to. Atheists, in turn, might be well served to consider how militant denunciation of theistic conceptions of reality and those who adhere to them, as opposed to critical skepticism and civil disagreement, contributes to their current unpopularity in many cultures.

In other words, atheists should really think about how we criticize religion. If we want to persuade people to give our way of thinking a chance, we can’t push them away to the point where they’ll just cling even harder to their faith. They already associate us with death — or something that’s just as bad. They don’t need any more reason to solidify that connection.

May 6, 2015
Sex Ed Curriculum in Ontario Faces Opposition as Misinformation Spreads
Next Post

May 6, 2015 Megyn Kelly's Excellent Defense of Free Speech and the Muhammad Cartoons
Browse Our Archives
What Are Your Thoughts?leave a comment