I can’t remember the last time I said this, but Fox News Channel’s Megyn Kelly is fantastic in this debate over the Muhammad cartoons with syndicated radio host Richard Fowler. 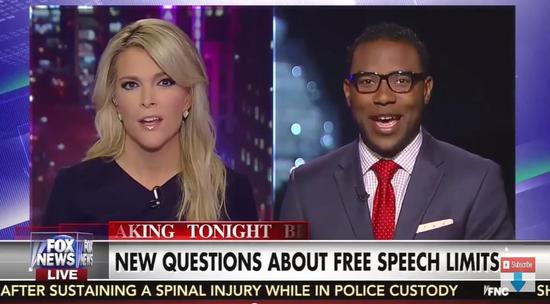 Fowler’s argument boils down to “don’t draw Muhammad because they’ll kill you.”

Kelly retorts that that’s precisely why this sort of speech needs protection.

As we’ve said on this site many times, some of the cartoons may be offensive, but as soon as you allow the irrational religious beliefs of others to dictate our own actions, it sets a dangerous precedent.

Blaming the cartoonists for provoking these attacks is like blaming a rape victim for what she was wearing. The problem is entirely with the assailants.

No one deserves to be killed because they expressed an unpopular opinion. That’s why, despite what Fowler argues, this is nothing like yelling “Fire” in a crowded theater. Kudos to Megyn Kelly for calling him out on it.

(via Mediaite. Thanks to Richard for the link)

May 6, 2015
New Research Shows the Existential Threat Atheists Pose to Believers; No Wonder We're So Disliked!
Next Post