Lloyd Evans calls our attention to the May episode of the Jehovah’s Witness online show, JW Broadcasting, in which Governing Body member Stephen Lett explains how the Church is losing money.

We don’t know how much since he never gives actual information… but Lett explains in the same way a Kindergarten teacher talks to five-year-olds that the Church needs all your “valuable things.” 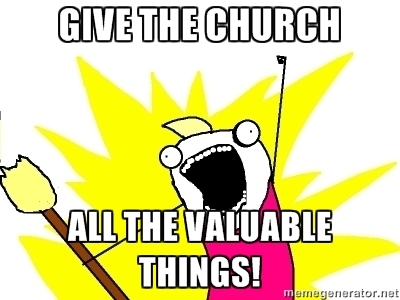 Sometimes, we may feel a little shy to talk about the financial needs of the organization. That is understandable. Because we in no way want to be categorized with other organizations, religious and otherwise, that coerce their supporters to donate.

However, because all of us have the privilege to donate funds, we would like to let you know something about our current situation. Then, you can respond as your heart impels you.

We have looked forward to this next fiscal year and projected the expenditures for all the theocratic initiatives we are scheduling. In doing the math, we found that the amount of money flowing out will be much greater than the amount of money that we have coming in at this time.

The Governing Body wanted to make you aware of the financial needs in the World Field. And we are confident that with this knowledge, your appreciative hearts will move you to do what you can to support the work at hand. A small donation from each of many of Jehovah’s people adds up to a large amount of dedicated funds that can be used powerfully by Jehovah’s organization.

Yes, we can honor Jehovah with our valuable things, including the financial support of True Worship.

We want to give our first fruits to Jehovah.

May all of us take the time to prayerfully consider what we can do to continue to live up to our dedication to Jehovah in all of the areas we have discussed.

Who knows how much they need — or if they really need anything at all.

If you are going to divulge a shortfall in funds, particularly with the aim of leveraging more donations (or “valuable things”) from a pool of supporters who are already lagging in this regard, the least you can do is treat them like adults and give some hard numbers. Nowhere in Lett’s rather patronizing, condescending comments is a single figure cited regarding the projected amounts of income and expenditure, and the shortfall between the two. Everything is left to the imagination (or, more accurately, gullibility) of the viewer.

Lett goes on to point out that JW leaders had done away with the mortgages of various JW churches (Kingdom Halls)… but that wasn’t supposed to mean congregations didn’t have to pay anything. They just had to donate an amount of money that was pretty much equivalent to what they were paying in rent. If not more.

Oh, and by the way, if any of those congregations have money lying around for building expansions, they should just go ahead and give that money to the JW worldwide organization, too.

Evans explains the problem with this arrangement:

… keep in mind that if Watchtower ever goes bust (an increasingly likely scenario) the kingdom halls will go straight down in flames with it under this new arrangement (being no longer financially independent), and none of the money invested in kingdom hall construction by local brothers will find its way back into their pockets.

Lett also says that there’s a misconception regarding the sale of assets in New York City. Yes, the Church sold “significant” property… but it only covered the cost of a few weeks’ of Church operating expenses. Really, that money was directed toward a new headquarters in Warwick, NY. So it’s not like they were flush with cash!

But since Lett doesn’t tell us any hard numbers, Evans fills in the blanks:

Four separate neutral sources, namely The Brooklyn Paper, The Observer, The Real Deal and the New York Post all cite an estimated figure of $11.5 million for the building costs of the new Warwick headquarters…

It has also been reported elsewhere that the Tuxedo complex, perhaps the most well-known facility for supporting the work at Warwick, cost Watchtower a mere $3.2 million.

Obviously there are a lot of other numbers we are missing for other properties and planning/development expenses (due entirely to Watchtower’s lack of transparency rather than any attempts to mislead or deceive on the part of anyone else), but even if we multiply the above two figures by 10 for the sake of argument, we are left with less than $150 million [in expenses].

But that property in Brooklyn? It was sold for at least $375 million. Probably more.

The math in Lett’s story just isn’t adding up… at least that’s the safe assumption. The Governing Body could just clear all this up by releasing the actual numbers… which they won’t, because that would give followers enough information to realize they’re being duped.

Hats off to Evans and everyone else shining a light on the Church’s shady practices.

May 6, 2015
Hillsdale College Chaplain Asks Students To Pray Away The "Evil" of Same-Sex Marriage
Next Post

May 6, 2015 Skutt Catholic Teacher Dismissed for Being Gay Gets Hired at Public School; One Student Will Follow Him There
Browse Our Archives
What Are Your Thoughts?leave a comment