Surgeons, set down your scalpels. Cindy Jacobs, co-founder of Generals International, has turned your hard-earned diplomas into mere toilet paper.

On a recent trip to Argentina, Cindy and her husband Mike Jacobs took to the stage in a packed church for two nights of healing the ill and broken in an untraditional (and medically unsound) way. Armed with only a microphone and the presence of 2,000 gullible attendees, Cindy, with the Lord inside her (but, like, not in a sexy way), miraculously straightened bowed legs, turned metal to bone, kicked the habit out of druggies, and made the immobile run maniacally. 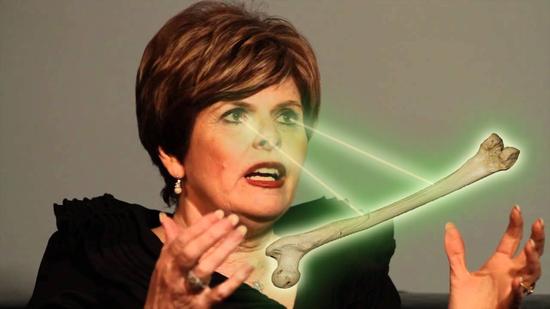 If the sound of her name rings a bell, you probably remember Jacobs as the woman who blamed the death of a large number of blackbirds on the repeal of Don’t Ask Don’t Tell a few years ago. Apparently she handles public mockery like a champ, because she’s back for more.

One of the unusual ways God sometimes uses me for healing is turning metal into bone. I made a call to those who had lost mobility because of metal pins, rods, or wires in their bodies. The healings were spectacular. Formerly frozen shoulders were healed, and others were once again able to bend over, move their feet, or run.

I’d love to blindfold this woman and set her loose in a scrap yard. Could you imagine archeologists trying to catalog a bone shaped like a Ford Pinto fender?

There was a woman who had a bone protruding out from under her chest cavity because of a car accident, and it completely vanished! The goodness of God was truly being made visible to the people.

Alright, I’m becoming dubious of her ability to upstage Penn & Teller. Unless she then made the chest bone reappear from behind a preschooler’s ear, followed by laser lights and applause, I’m going to have to call a Charlatan Alert on Jacobs and her donation-begging ministry.

I have two questions for Cindy Jacobs:

I’m not holding my breath waiting for her responses.

(Thanks to Kyle for the link. Original image via YouTube)