The Intentions of the Charlie Hebdo Cartoonists and Pamela Geller Are Worth Discussing May 5, 2015 Hemant Mehta

A couple of nights ago, the American Freedom Defense Initiative and its director Pamela Geller hosted a “Muhammad Cartoon Exhibit.” As you know by now, two extremists began shooting their guns in the parking lot and were soon killed by police (who deserve a lot of credit for saving countless lives inside the building).

As Terry suggested the other day, you can find Geller odious while still defending her group’s right to host this contest.

But I want to bring up another question: Is there a difference between the cartoons at Geller’s event in Texas and those in Charlie Hebdo? 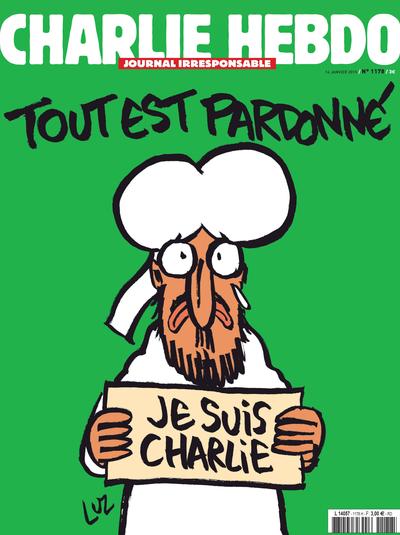 Geller and AFDI have a history of anti-Islamic activism to the point where the Southern Poverty Law Center lists AFDI as an extremist group. There are no moderate Muslims in Geller’s world; that’s why she opposed a Muslim community center near the site of the World Trade Center buildings that posed no risk to anybody.

She claimed to hold this contest for a higher purpose — free speech — but her previous actions suggest she wanted to piss off Muslims more than she wanted to fight against censorship. It’s reasonable to think those involved in the event were trying to anger Muslims.

That’s not to say the potential attacks were justified. Of course they’re not. I’m only saying I take no joy in defending this contest because I don’t believe Geller’s intentions were pure. Still, it’s “not okay to shoot other people because you’re offended by what they draw, even if they drew it to offend you.”

Meanwhile, Charlie Hebdo‘s reputation for being anti-Muslim is undeserved. The cartoonists there criticized all religions — and an article in Le Monde this week even said that, over the past decade, the magazine targeted politics more than religion, and Christianity far more than Islam: 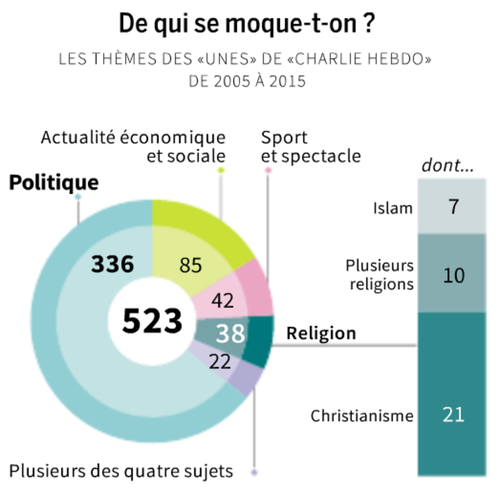 Hebdo cartoonists Jean-Baptiste Thoret and Gerard Biard even told Charlie Rose last night that there was no comparison between them and the Texas cartoonists:

“To be honest, I can imagine the kind of comparison you can make between the Charlie Hebdo attack of January 7 and this event, but there is nothing to do [with one another], there is no comparison, absolutely no comparison,” Jean-Baptiste Thoret said in a clip of a longer interview set to air tonight.

“We don’t organize contests, we just do our work,” Gerard Biard added. “We comment on the news. When Muhammad [pops up] in the news, we draw Muhammad. But if he didn’t, we didn’t — we don’t.”

You could easily make the argument that the Hebdo cartoonists were more interested in the satirical power of their work than anything else. They didn’t go out looking to offend Muslims. You can’t say the same for Geller. I don’t blame them for distancing themselves from her group.

None of this will make a difference to critics who think anyone drawing a picture of Muhammad is equally culpable of doing something wrong, but it’s a distinction worth making, one that’s ignored by the cowardly PEN authors protesting an award given to Charlie Hebdo.

It’s much easier to defend what the Hebdo cartoonists were doing (and continue to do) than anything Geller-sponsored.

Of course, all of this would be moot if more publications had the courage to publish more images of Muhammad when done in the spirit of free speech. They don’t need to be offensive or distasteful, and they would send the message that Muslim beliefs don’t dictate how the rest of us must think or act.

Given that, I actually commend the winner of Geller’s contest, ex-Muslim Bosch Fawstin, for drawing a cartoon with a very serious point:

We could stand to see more images like that.

May 5, 2015
Missouri Middle School Will Reward Students for Their Hard Work by Tricking Them Into Going to a Christian Ministry
Next Post