For a couple of hours yesterday, Steam (a website where you can upload games you create or pay to play them) allowed a game called “Kill The Faggot” on its site with the sole objective of killing LGBT people: 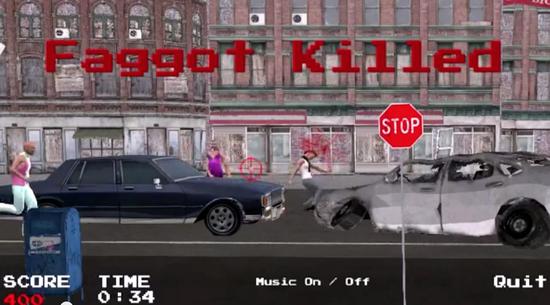 The game makes very clear that its goal is to shoot and kill gay people (with liberal use of the pejorative F-word in the game’s title, at that). Players get points for killing gay people — more points if the person killed is transgender — and they lose points for any straight people they kill. It’s hard to make a judgment call about the “most” offensive thing in this game, but we were particularly disturbed to hear the game’s announcer celebrate a kill by saying, “AIDS carrier eliminated.”

You won’t be surprised to learn that Randall Herman, who created the game, is a Christian who supposedly began Devotor Footwear, “To promote the words and teachings of Jesus Christ through quality footwear.” (A Kickstarter for the product failed miserably last year.) Herman told Ars Technica that he simply built that website for a friend, though evidence suggests otherwise.

Herman appears to be in the process of deleting his Internet footprint, but his name is going to be permanently linked with this game as it should be.

Someone tell me again how that whole “Love the sinner, hate the sin” thing works?

***Update***: Skaldic Games, which released this game, put out this statement:

Originally this was only going to be a part of the other game, but I decided to release it on Greenlight to see people’s reactions. The reason behind this particular game is because of how tired I am of people being overly sensitive and how easily offended people are by every little thing, especially with LGBT issues. I have worked in the game industry since 2007, so I know that’s how the game industry pretty much is. I didn’t make this game to attack LGBT people personally, and no I don’t hate gays and think they should be treated farily, but I made this game just to piss off those people that are way too overly sensitive, which includes straight people. These people that think if you are even remotely homophobic, you are “hateful” and a “bigot”, and do everything they can to destroy you in every vicious way possible.. So I decided to go down a path that most developers are afraid to go down: to piss these people off by making the most overly offensive game possible to these idiots to prove a point. The point being that a crappy made video game would offend people so much. I mean so offended that people will waste all their time posting on forums, redit, etc of how disgusted they are, offended, how much everyone involved in the game should die, and even getting into large debates over it of how worthless and evil we are, etc. Lots of people are sending very vicious and disgusting emails as well, and it just proves that my mission was accomplished in pissing off these people, and how many of these sick people in the gaming world there are that would wish all kinds of physical harm on me. I mean come on, its just a crappy made video game made by a no-name developer. Why do you care so much? It’s obvious no one in their right mind would take this game seriously. If someone made a “Kill all straight white people game”, I would totally play it and have a laugh, as seeing it wasn’t made to be serious. Keep sending all the threats and hate mail though, its a fun read, and proves you have no time on your hands.

Plenty more on their site…

(Thanks to Ian for the update)

May 5, 2015 Catholic Priest Who Molested Three Boys Finally Apologizes... to His Church Colleagues
Browse Our Archives
What Are Your Thoughts?leave a comment