Woman Who Vandalized Satanic Display in Florida Capitol Now Trying to Capitalize on Her Crime May 4, 2015 Hemant Mehta

Late last year, we learned that The Satanic Temple’s display in the Florida State Capitol Building had been vandalized.

It turned out that the vandal was Susan Hemeryck, a 54-year-old Tea Party activist who wore a shirt with the phrase “Catholic Warrior” on it.

At the time, she said this about her crime:

[Hemeryck] had only one regret about Tuesday’s incident.

‘I just yanked that little devil off the fishing line,’ she said. ‘I should have just done a better job and finished it off for good.’

There was even security camera footage of Hemeryck walking out with the display:

A couple of months ago, in court, Hemeryck pled not guilty on misdemeanor charges of criminal mischief. (How is that even possible when there’s videotape evidence against her?)

“We are not sure there was a crime,” Hemeryck’s attorney Mike Bauer said. “I think this case represents the state basically putting an attack on Christians. That would be her viewpoint.”

She vandalized The Satanic Temple’s property… but, because she faces punishment for her crime, it’s an attack on her faith.

There’s some #ChristianLogic for you.

Hemeryck’s trial was supposed to begin in March, but prosecutors decided not to pursue the case because, according to a news article, they claimed there was “a lack of evidence that the display was damaged.”

You see? She didn’t vandalize the display. She just tried to vandalize it and failed miserably. And even if she did destroy it, it’s just a simple display, so stop going after the poor woman.

Hemeryck didn’t even show any regret:

Hemeryck in a statement said “I am very grateful to God for giving me the grace to take a stand against Satan and those who invoke his name even if they do not fully know what they are doing.”

“I was not afraid of going to trial,” she added. “I wanted the jury to know that I did not act criminally as wrongly portrayed, but a devout Catholic following the Church’s teaching for non-violent and peaceful opposition of evil.”

So she admitted trying to destroy the display… in order to follow her Church’s teachings.

I promise you we’d be seeing a very different result if an atheist tried to vandalize a Nativity Scene in the state capitol building.

And now, perhaps drawing from other Christians who think they’re being persecuted when they’re not, Hemeryck is capitalizing on her infamy by asking others to give her money for her act of vandalism: 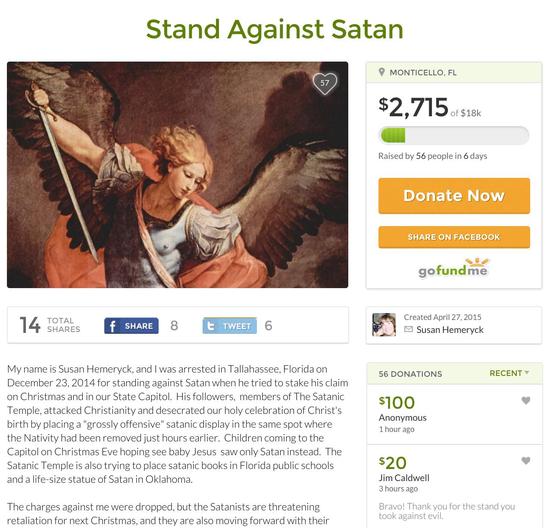 My name is Susan Hemeryck, and I was arrested in Tallahassee, Florida on December 23, 2014 for standing against Satan when he tried to stake his claim on Christmas and in our State Capitol. His followers, members of The Satanic Temple, attacked Christianity and desecrated our holy celebration of Christ’s birth by placing a “grossly offensive” satanic display in the same spot where the Nativity had been removed just hours earlier. Children coming to the Capitol on Christmas Eve hoping see baby Jesus saw only Satan instead. The Satanic Temple is also trying to place satanic books in Florida public schools and a life-size statue of Satan in Oklahoma.

The charges against me were dropped, but the Satanists are threatening retaliation for next Christmas, and they are also moving forward with their agenda to entrench Satan in America’s government halls and in our public schools. This is a hate group, whose actions can be compared to the Nazis displaying a swastika at Hanukkah, or the KKK erecting a burning cross on Martin Luther King day.

The public expression of our Judeo-Christian faith is part of our American heritage, because it is upon these principles that America and her Constitution were founded. Not only is it wrong for an atheistic and/or satanic minority to attempt to impose its values upon the faithful majority, it is deadly dangerous for us to allow Satan a place in our public square. Our nation is already walking in darkness; once we let Satan in, unopposed, we will not be able to shut the door against the evil which follows. This is a line we cannot cross. NOT NOW, NOT EVER!!

I lost my home and my job because I took a stand against this evil, and I need a little help with personal living expenses. I also have a wonderful attorney, Michael Bauer, who has stood by me through all of this, and we need your help in taking the next step in our efforts to legally keep Satan out of our Capitols and out of our schools. Won’t you please help us to stand firm and hold the line against Satan? By the grace of God, and with your prayers and support, let’s cast Satan out of America and back where he belongs!

In short, gimme money because the Satanists are evil… even though I’m the one who committed a crime, and they were the ones following the rules.

Her donors are praising her “stand” against evil… as if destroying someone else’s property — or even attempting to do that — represents proper civil discourse.

There’s no evidence, by the way, of Hemeryck losing her home or job because of these particular actions, though getting arrested for vandalism would reflect pretty badly on any employer.

(via Joe. My. God. Large portions of this article were posted earlier)

May 4, 2015
Al Qaeda Takes Credit for Slaughter of Atheist Bloggers, Saying the Attackers "Taught a Lesson to Blasphemers"
Next Post