Aidan Fenton, a seven-year-old diabetic boy from Australia, is dead because his parents took him to an alternative medicine practitioner instead of a qualified doctor.

When you hear the specifics of what that alternative doctor (below) did to him, you’re going to be horrified: 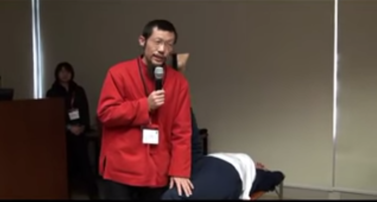 [Hongchi] Xiao had been in Sydney following a tour of New Zealand to promote his “Paida-Lajin” therapy, which involves slapping the body until it bruises to “unblock meridians and drive out poisons”.

It is understood Mr Xiao has claimed participants in the seminar were asked to fast for three days and to undertake the slapping and stretching exercises that can prompt vomiting and dizzy spells, known as a “healing crisis”.

Aidan was among those vomiting during the seminar.

He didn’t make it for very long beyond that.

Police are investigating the situation. It’s unclear why Aidan’s parents chose this alternative method over something far more reliable, but as we’ve seen in far too many cases with religious parents, they put their faith in an untested method that *sounded* scientific but was nothing of the sort.

May 1, 2015
"Because the Bible Said So": An Awful Argument Against Gay Marriage
Next Post

May 1, 2015 Anti-Gay Rep. Randy Boehning, Republican of North Dakota, Is Outed After He Trolls For Men On Grindr
Browse Our Archives
What Are Your Thoughts?leave a comment