In a Pleasant Surprise, Venice (Florida) City Council Votes Against “In God We Trust” Plaque

Here’s something you don’t hear every day: Nice job, Florida!

The Venice City Council voted 5-2 this week against adding an “In God We Trust” sign in the council chambers: 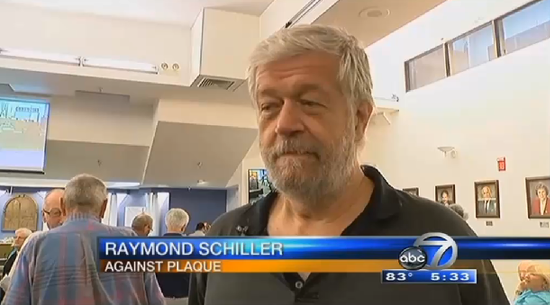 “The question of God in the government should be avoided. It just raises too many issues and it isn’t necessary,” says [resident Raymond] Schiller.

Schiller spoke on behalf of several residents in opposition to the plaque. He says it might have been appropriate in the past — but not now.

“The secular community is growing. To have a sign like that may have been appropriate 60 years ago,” says Schiller.

As in other cities, there was plenty of support for the sign, and advocates say we haven’t heard the last of this issue.

But for one night, anyway, the elected officials did the right thing.

April 30, 2015
A California Megachurch Took Over a Local Public School Board and the Results are Disastrous
Next Post

April 30, 2015 High School Principal Suspended After Leading Prayers at Fellowship of Christian Athletes Meeting
"Good point."
Len Woman Injured After Falling 20 Ft. ..."
"we are genetically programmed to take more risks since we are so much less important ..."
crackerMF Woman Injured After Falling 20 Ft. ..."
"A few seconds . . . that was my limit, still is."
David This Heavy Metal Remix of Televangelists ..."
"Don't forget the old why buy the cow if the milk is free slander. Tells ..."
Fafnir the fugitivewageslave For Many Christian Women Raised in ..."
Browse Our Archives
What Are Your Thoughts?leave a comment