How hard is it to understand that teachers and administrators cannot lead prayer in public school? It doesn’t matter if you’re a coach or the faculty sponsor of the Bible Club. It’s not your job to lead prayers. Students can do it. You just get to stand back and watch. It’s that simple.

Apparently that lesson never made its way to Meriwether County, Georgia. Manchester High School Principal Dr. Michael Lehr (below) recently filled in for the sponsor of the Fellowship of Christian Athletes, which is fine, but then he “read scripture as well as prayed with students in attendance.” 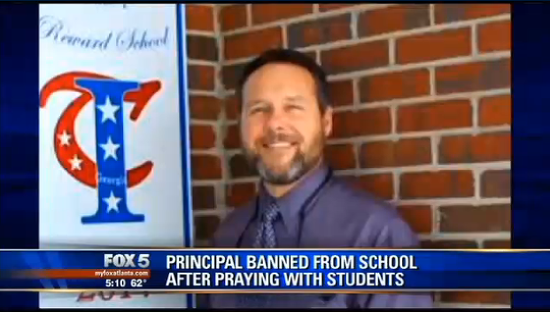 Neither Lehr nor Lane would speak to media about the suspension, but let me go to bat for Lehr for a moment.

If he just didn’t know the law, understands it now, and is willing to say “It won’t happen again,” this is completely overblown. He doesn’t deserve to be suspended over what could have been an innocent mistake.

But if he still thinks he didn’t do anything wrong… well, then he’ll have plenty of time to read up on the law during his time off. Though Lehr says he’s already looking for a new job.

In a bit of a twist, according to the news report, Lehr said that Lane was by his side when he read Scripture at graduations and had no problem with it. Seeing as that’s also illegal, maybe the whole district could use a lesson in how the Establishment Clause works…

April 30, 2015
In a Pleasant Surprise, Venice (Florida) City Council Votes Against "In God We Trust" Plaque
Next Post

April 30, 2015 Atheist Groups Are Making Large Donations to Help Nepal Relief Efforts
Browse Our Archives
What Are Your Thoughts?leave a comment