Last month, the Stokes County Board of Commissioners (in North Carolina) voted unanimously to put the words “In God We Trust” in the County Courthouse. While this is obviously a promotion of religion, legal arguments against it across the country have failed because advocates always argue “But it’s our motto!” and get away with it.

But resident Steven Hewett (below) is now trying to use the same script to advance his own slogan: 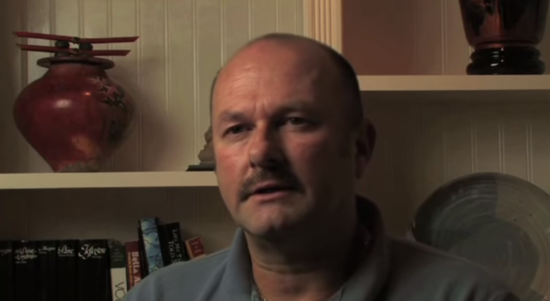 The commissioners will vote on the request… at their May 11 meeting in Danbury, said Darlene Bullins, the board’s clerk.

Brilliant! Now, given what the Commissioners said last month — subtly applauding the Christian who brought forth the “In God We Trust” proposal — I don’t know that this discussion will go anywhere. But why not? If the sign would be free of charge and promote “reason” (as opposed to atheism), what argument would they have against it? “Reason is bad”? Of course not.

By the way, if Hewett’s name is familiar to you, it’s probably because he’s a war veteran who fought a years-long lawsuit to remove a Christian flag from a local war memorial. In January, city officials accepted a settlement offer that got rid of the flag, removed a statue of a soldier kneeling before a cross, and paid the legal fees for Hewett’s attorneys.