You Really Are Just Being Racist Here… April 28, 2015 Hemant Mehta

You Really Are Just Being Racist Here…

In general, when I find myself disagreeing with people I know and like, I’ll reach out to them privately to see if we can clear up any confusion and fix things that way. I’ve been criticized plenty of times by people who know me, but when they didn’t like something I wrote, they took the public-shaming route instead of giving me a chance to respond to their concerns first. It’s lazy, it’s irresponsible journalism, and (most importantly) it usually doesn’t work. It just causes the other person to double-down on whatever they were doing before.

So when I saw this post by Dusty Smith, a popular YouTube atheist under the handle “Cult of Dusty,” it bothered me. I usually “get” his sort of politically-incorrect humor even if it’s not for everyone, but there’s just nothing funny about this:

I love how shocked CNN is that black people are violently looting in Baltimore right now. Black people using a tragedy as an excuse to steal shit? Who could have possibly predicted such a thing?

Right, Dusty. Black people love violently looting during tragedies. It’s also telling of our racial politics these days when the focus of anyone’s attention is on the reaction to a tragedy and not the brutality that led to it in the first place. (As comedian Keith Lowell Jensen put it, “I don’t understand why they can’t just continue to ask peacefully for the police to stop murdering them.”)

It’s not the first time Dusty’s said something racist, but he normally hides behind the defense of joke-telling (I was just kidding. If you’re offended, that’s your fault). But his subsequent post and comments on the original thread indicate he’s not going for shock value here. He truly believes it. (“Facts can NEVER be racist.”)

Anyway, as I said earlier, I tried reaching out to him privately, but he just said to me what he later said on Facebook. So that didn’t go anywhere. So I’m writing this post.

Because maybe some of his fans can get through to him in a way I can’t.

Maybe it’ll make you question whether you want to support him or watch his videos in the future.

Maybe it’ll make you question other YouTubers who promote his Logic-Wear clothing line.

I’m not sure what else I can do, but at the very least, I won’t post any more of his videos on this site.

For someone who ends all of his videos by shouting “Logic,” Dusty’s using none of it on this issue. 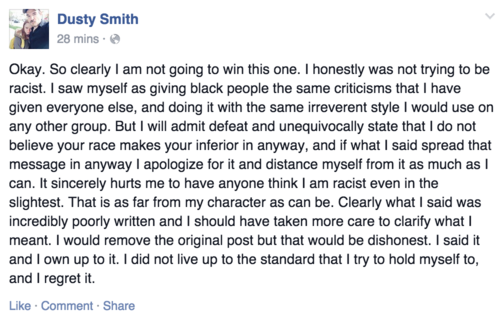 Okay. So clearly I am not going to win this one. I honestly was not trying to be racist. I saw myself as giving black people the same criticisms that I have given everyone else, and doing it with the same irreverent style I would use on any other group. But I will admit defeat and unequivocally state that I do not believe your race makes your inferior in anyway, and if what I said spread that message in anyway I apologize for it and distance myself from it as much as I can. It sincerely hurts me to have anyone think I am racist even in the slightest. That is as far from my character as can be. Clearly what I said was incredibly poorly written and I should have taken more care to clarify what I meant. I would remove the original post but that would be dishonest. I said it and I own up to it. I did not live up to the standard that I try to hold myself to, and I regret it.

Good on him. Hopefully, he’ll remember this the next time he considers making a similar comment.

I know, I know, it’s more of a “I’m sorry you took it the wrong way” apology than a “I was wrong to say it in the first place” statement… small steps, people. No one changes their mind overnight. The goal is to make him think twice before saying something like he did again — and maybe, in time, he’ll figure out why he shouldn’t.

April 28, 2015
A Reminder That the Same God You're Thanking for That Parking Spot is Killing Innocent People in Other Countries
Next Post