A couple of weeks ago, I wrote about how the University of Florida (in Gainesville) had opened up a new building — Heavener Hall — for business education that greeted students with a Bible verse (click image to enlarge): 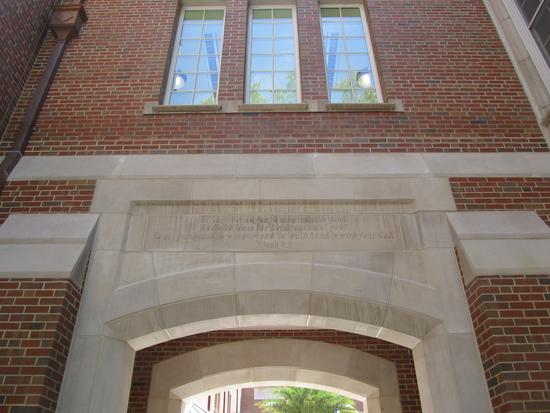 He has showed you, O man, what is good.
And what does the Lord require of you?
To act justly and love mercy and to walk humbly with your God.
Micah 6:8

Far from just inspiration words derived from the Bible, that verse specifically promotes the Christian faith and has no business at a public school. The Freedom From Religion Foundation sent the school a letter pointing out the Establishment Clause violation:

Now, students at the school are getting in on the action, too.

Gator Freethought and Humanists on Campus — two atheist student groups at the university — sent a letter to school president Dr. W. Kent Fuchs expressing their support of what FFRF said:

These two organizations and their respective members deeply value the separation of church and state, a founding principle of the United States embodied by the First Amendment. We, as students and staff of the University of Florida, feel that the quote promotes Judeo-Christian beliefs over all other beliefs on campus, and that this alienates members of the University of Florida community, such as ourselves, who do not hold the same beliefs and encourages discrimination against ourselves and other individuals of different faiths, creeds, and beliefs.

While we understand that the building may have been funded in large part by a few particular donors, and that the inclusion of this inscription may have been done to appease their own desires in constructing Heavener Hall, the display of a Biblical verse on a building owned by a public university — a university with a diverse student body of many religions, philosophies, and systems of belief — can be seen as the endorsement of Christianity by the university. We ask that, not only for ourselves as non-religious individuals, but also for those students who do not call themselves followers of Judeo-Christian doctrines, that the Biblical quote be replaced with a more secular, encompassing inscription.

So far, the school hasn’t released any sort of public response, but they’re going to have to soon.

Critics often blame the Wisconsin-based FFRF for meddling in affairs that don’t directly affect them — a specious claim since FFRF acts on behalf of local citizens. But now that UF students have weighed in on the matter, it takes that argument off the table. They don’t want the inscription. They’re politely asking for it to be changed. And if the school doesn’t comply, they’ll take legal action as needed.

April 28, 2015
Daniel Dennett on the Future of Faith: "Religion Recedes Whenever Human Security and Well-Being Rises"
Next Post

April 29, 2015 A Tribute to Christopher Hitchens
Browse Our Archives
What Are Your Thoughts?leave a comment