Where’s the Camera You Promised to Buy? April 27, 2015 Hemant Mehta

Where’s the Camera You Promised to Buy?

Loud, obnoxious Christian evangelist Josh Feuerstein (he of the vertical videos on YouTube) ran a successful fundraiser last August asking for $20,000 to buy a professional video camera… and it was successful. He actually raised more than that. And then the problems began.

He bragged about his other expensive purchases online. He took down the fundraising page so there’s no record of it. And the vertical videos continued…

Seth Andrews summarized the situation in this video: 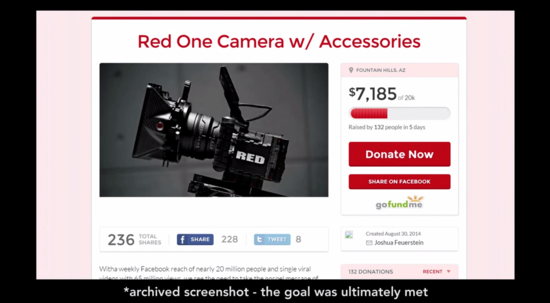 The most damning part of the video for me was that the camera Feuerstein wanted was far more expensive and far less practical than anything he needed for YouTube.

When I asked him (via email) for proof of purchase of the equipment last December, he didn’t provide it. Instead, he threatened me with a lawsuit if I said anything to the contrary.

Well, the hosts of the Miami Valley Skeptics podcast knew Feuerstein was speaking at a local church in Ohio, so they went to the event. During the meet & greet, Matt Kovacs asked him about the camera directly:

Feuerstein says he bought two Canon 5D cameras (that are far cheaper than the one he was fundraising for)… yet he still records videos with his camera phone.

How’s that for a bait and switch by a Christian pastor? He’s under no obligation to show us his financial records, but the rest of us have every right to question his ethics. I wish I could tell you why other Christians aren’t doing the same thing.

This is why you don’t trust people who raise money for a cause without providing transparency and accountability. Especially when they claim to be doing it to glorify God.

(Thanks to Pierre for the link)

April 27, 2015
Another Compilation of Sam Harris' Best Arguments and Comebacks
Next Post

April 27, 2015 Several Writers Withdraw from Event Because Charlie Hebdo Will Receive Freedom of Expression Courage Award
Browse Our Archives
What Are Your Thoughts?leave a comment