John Oliver: Dr. Oz is the “Worst Person in Scrubs Who Has Ever Been on Television” April 27, 2015 Hemant Mehta

John Oliver: Dr. Oz is the “Worst Person in Scrubs Who Has Ever Been on Television” 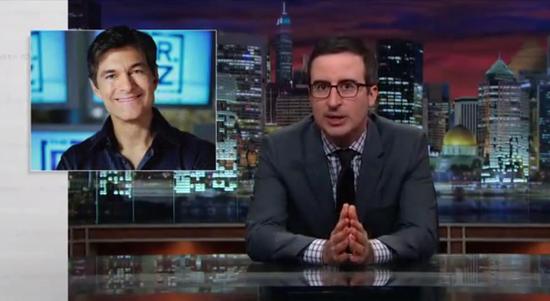 You are the worst person in scrubs who has ever been on television, and I’m including Katherine Heigl in that.

Do you have any idea how difficult it is to be worse than Katherine Heigl?

You are also the admittedly handsome ringmaster of a middling, mid-afternoon televised snake oil dispensary. And it says something that, even when you do a show with seven fake models of human feces, the biggest piece of shit on the stage has his name in the title.

Full video of that segment here. And I’ll just put this out there: Last Week Tonight is easily one of the best shows on television right now. If you’re not a regular viewer, you should be.

April 28, 2015 A Reminder That the Same God You're Thanking for That Parking Spot is Killing Innocent People in Other Countries
"" because all it would take to drag them down/have them give up state/company secrets ..."
Kevin Pennington The Lack of Opposite-Gender Friendships Among ..."
"In all fairness it should be pointed out that Altier also believes crackers turn into ..."
Robert Conner MN Priest Who Said COVID Death ..."
"If for some reason you do lose your faith it will be a totally involuntary ..."
Astreja Democrats Do Not Have “Anti-Catholic” Bias, ..."
"masturbation is ok - it sesm even for our miserablte nannybot."
StevoR Podcast Ep. 341: The Supreme Court’s ..."
Browse Our Archives
What Are Your Thoughts?leave a comment