Over the weekend, in response to the Iowa Faith & Freedom Coalition summit attended by several Republican presidential candidates, Fox News Channel’s Father Jonathan Morris made clear that faith was a prerequisite for public office: 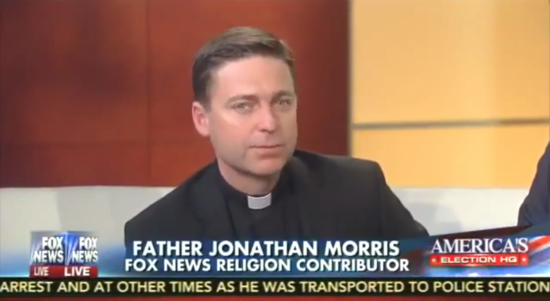 And what about atheists?

Morris saw the trap and tried to side-step the bait by saying, “It certainly makes a difference who that person is.” Which is just another way of saying we’re not qualified.

Because someone who looks at the evidence and supports church/state separation would be a travesty, I guess…? I would be more worried by a President who fears the consequences of the afterlife more than the effects his or her decisions will have in this life. If you think following the Bible is more important than following the Constitution, we should all be frightened.

(It goes without saying that Morris probably opposes religious candidates who aren’t Christ-centered. So it’s not enough that they have faith. They have to have his kind of faith.)

While Morris’ comments about atheists were making the rounds online, something else he said went completely under the radar: “One thing is very certain: you can’t fake religion.”

Any political observer would tell you that’s bullshit. Candidates overstate their faith all the time, pandering to religious audiences, speaking their language, using the buzzwords — and the public never seems to mind. They clamor for it. While some of the candidates, like Mike Huckabee, are undoubtedly religious, most of them just say what they need to say to get the base on their side. How many Republicans, right now, are waiting for the Supreme Court to legalize gay marriage so they can stop using Christian arguments against it? Their faith takes a backseat once they realize it doesn’t help them win votes.

Anyway, you’d think a Catholic priest of all people would understand the problem of automatically putting trust in someone because he believes in God… but it’s not like thinking through his argument has ever been one of Morris’ skills.