Christian Pastor: The Passengers on Germanwings Flight 9525 Deserved to Die Because They’re Sinners

About a month ago, Germanwings flight 9525 crashed in the French Alps, killing all 150 people on board. As we’ve since learned, co-pilot Andreas Lubitz locked the other pilot out of the cockpit when he went on a bathroom break, and then purposely drove the plane into the mountains on a suicide mission (taking everyone else along with him). Just an awful, awful tragedy.

German televangelist Wolfgang Wegert apparently spoke about the crash last week during a sermon — just two days after the public funeral — and made a stunning declaration (translated below): 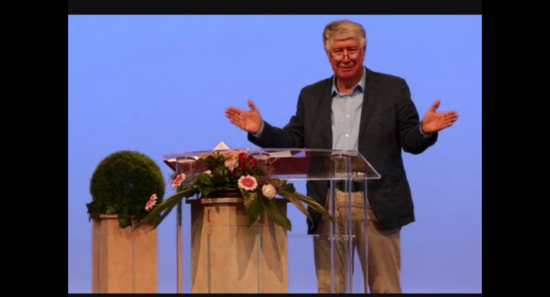 … when people die, be it in an old folks home or in a plane crash, they die because they are guilty.

Maybe this needs to be cut from the broadcast.

But it is still true: When people die, be it in an old folks home or in a plane crash, they die because they are guilty. Because, due to our sin, we all deserve death. Without delay. Our question should not be “Why did they die?”… but rather “Why are we still alive?”

Turns out his church put the original version of the audio online — cutting nothing from the broadcast — only to quickly replace it with the boldfaced comments above edited out.

… but not before atheists downloaded that original audio and uploaded it to YouTube (Update: That video has been taken down, but another copy is below):

German media immediately picked up on the story, and Wegert’s church was forced to issue an explanation: It was all just a big misunderstanding! He wasn’t talking about the tragedy at all! And to avoid people connecting his mention of a generic “plane crash” to the Germanwings tragedy (which was totally unintentional, everyone!), they deleted that portion of his sermon from the available audio.

Just one problem with that story: Wegert had given a speech just a few days after the plane crash in which he said the exact same thing… while directly referring to the Germanwings crash.

At the end of that speech, he remarked,

A plane crash is a reminder of our own mortality. By that, God wants to make people repent, so that we let us be saved by Jesus.

Because the best way to get people to accept Christ is by murdering a whole bunch of innocent people.

I’m told by one of the German atheist bloggers, Skydaddy, that a relative of someone who died in the crash filed charges against Pastor Wegert (“supposedly for denigrating the memory of a dead person”) and said as much on the pastor’s Facebook page. But the blogger couldn’t confirm this because Wegert’s Facebook page is now offline.

Someone remind me again how Christianity is all about love?

April 27, 2015 Media Outlets Backtrack on Their Reporting After Famed Wellness "Guru" Belle Gibson Admits Cancer Hoax
Browse Our Archives
What Are Your Thoughts?leave a comment