On Thursday, more than 30 religious leaders from various denominations signaled, less than a week before the U.S. Supreme Court is scheduled to hear oral arguments on whether same-sex marriage is a right under the U.S. Constitution, that they still support marriage defined as “the union of one man and one woman.”

The group, which includes the president of the U.S. Conference of Catholic Bishops and 34 other representatives from Evangelical, Anglican, Pentecostal, and Mormon churches, wrote an open letter to elected officials saying that maintaining the status quo is better for the “well-being of children.” This is despite the fact that studies suggest children of same-sex couples may actually fare better and that allowing same-sex marriage could reduce stress and strengthen families.

In the one-page letter, which doesn’t cite any research on the health or well-being of children raised by same-sex couples, USCCB President Joseph E. Kurtz and the other faith leaders say that every child deserves the opportunity “to be raised by his or her own married mother and father.”

Marriage as the union of a man and a woman is the only institution that encourages and safeguards the connection between children and their mother and father. Although this connection cannot always be realized and sustained — and many single parents, for example, are heroic in their efforts to raise their children — it is in the best interests of the state to encourage and uphold the family founded on marriage and to afford the union of husband and wife unique legal protection and reinforcement.

The open letter, called “The Defense of Marriage and the Right of Religious Freedom: Reaffirming a Shared Witness,” was issued to “all in positions of public service.”

Despite the fact that marriages have ancient and untraceable roots — they likely began as a means to form alliances, not out of love — Kurtz and the other Christian leaders insist they want to keep marriage “as it has been understood across faiths and cultures for millennia.”

The redefinition of legal marriage to include any other type of relationship has serious consequences, especially for religious freedom. It changes every law involving marital status, requiring that other such relationships be treated as if they were the same as the marital relationship of a man and a woman. No person or community, including religious organizations and individuals of faith, should be forced to accept this redefinition.

The fact is that marriages have existed in some form or another for essentially as long as human beings have been around. Although many wedding ceremonies have religious references and traditions, the act of marriage itself is not a religious one; it’s a human one.

But even if marriage has been consistently been defined as being between a man and a woman, as the 35 religious leaders and other same-sex marriage opponents suggest, is tradition a good argument against civil rights equality? Historically, we have seen that the answer is, “No.”

I’m reminded of a quote by Arkansas Circuit Court Judge Christopher C. Piazza, who (briefly) invalidated the state’s ban on same-sex marriage and recognition of such marriages performed out-of-state. In his May 2014 ruling, the judge explained why courts must be “especially vigilant” in cases where a group has been subjected to a “tradition of disfavor.”

“Tradition alone cannot form a rational basis for a law,” Piazza wrote. “The fact that a particular discrimination has been ‘traditional’ is even more of a reason to be skeptical of its rationality.” 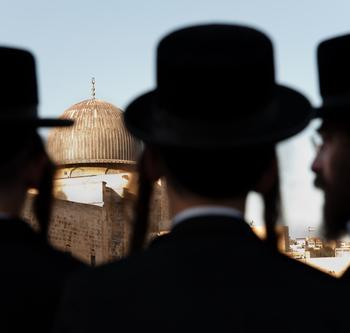 April 26, 2015
Interfaith Leader: If Orthodox Jews Don't Want to Sit Next to Women on Planes, We Should Accommodate Them
Next Post

April 26, 2015 Miami Assistant Police Chief Criticized for Not Putting Hand Over Heart During Pledge of Allegiance
Browse Our Archives
What Are Your Thoughts?leave a comment