How horrible must your life be if you get irrationally offended every time someone doesn’t salute the flag to your liking during the Pledge of Allegiance?

In Miami, Assistant Chief Anita Najiy — the highest-ranking female cop in the city — kept her arms at her side during the ritual instead of putting a hand over her heart. Now, the head of the Miami police union is flipping out because ‘Murica. 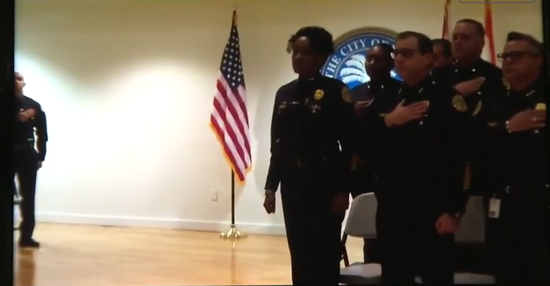 Fraternal Order of Police President Javier Ortiz wants Najiy reprimanded for not saluting the flag or covering her heart during the Pledge of Allegiance.

“Since she clearly has no respect for the flag or the United States, on behalf of the Fraternal Order of Police, I am requesting that Assistant Chief Najiy is removed as the commander of the MPD Honor Guard Detail,” Ortiz said in a letter Monday to Police Chief Rodolfo Llanes.

“If she isn’t loyal to the United States of America, what country is she loyal and shows allegiance to?” he asked.

As much as I’d like to say Najiv was protesting the Pledge, she was actually just following protocol:

Police Maj. Delrish Moss produced a section of the conduct code for U.S. military personnel, which he says supercedes police code. It reads: “When in uniform, indoors, stand at attention, remain silent, and face the flag.”

So she was following military rules… and that, in Ortiz’s eyes, makes her un-American. What he has against her, I don’t know, but even if she sat down during the Pledge, it wouldn’t make her any less patriotic. If you equate being a True American with participating in a mindless ritual, your priorities need adjustment.

Thankfully, it looks like no one is taking Ortiz seriously. After all, he’s the same guy who went to Ferguson, Missouri to show solidarity… with the officer who shot and killed Michael Brown.

April 26, 2015
Religious Leaders Recommit to Wrong Side of History Days before Same-Sex Marriage Debate
Next Post