Explaining her decision to block an exemption for rape and incest victims from Tennessee’s newest proposed abortion restrictions, State Rep. Sheila Butt made the peculiar argument that such an exemption shouldn’t exist because rape and incest isn’t typically “verifiable.”

Democratic Rep. Craig Fitzhugh proposed the amendment, along with another that offered an exemption for mental health reasons, as part of the restrictions put forth in HB 977. The bill would mandate counseling and a 48-hour wait period for any woman who wanted an abortion, except in cases of medical emergencies. Fitzhugh’s proposed amendments would have bypassed the wait period for those additional cases.

Butt, a Republican, took umbrage with both suggestions. An exemption for mental health, she argued, was simply a “loophole for the abortion industry.” Her response to the exemption for rape and incest victims was equally callous.

This amendment appears political because we understand in most instances, this is not verifiable. Let’s make sure that these women have the information and the understanding to act. 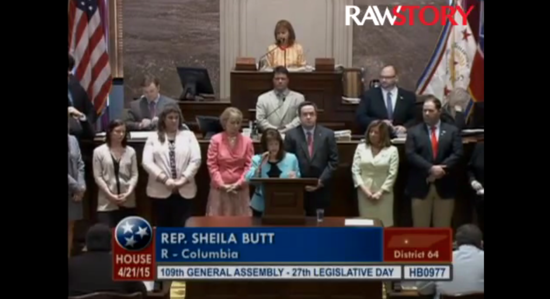 Rep. Butt is not only okay with enforcing burdensome restrictions on women in general, but she is also content to force them on rape and incest victims, with the implication that they could just be lying about being raped anyway. Because it’s okay to burden all victims because we can’t always guarantee that every patient is telling the truth, and it’s “political” to exempt rape victims from additional restrictions.

Legislation that mandates waiting periods and other such barriers that second-guess the patient’s motives and forethought is unnecessary and patronizing. Pregnant women seeking abortions are not children acting on a whim, and there’s no reason for legislators to act as if they are. It’s particularly disturbing, however, to see this disregard for women and girls who have already been subjected to abuse and trauma leading to their current need for abortion.

This is hardly the first time Butt has made an ass of herself through callous commentary, though. As Huffington Post‘s Samantha Lachman notes,

Butt previously courted controversy in February when she suggested that a National Association for the Advancement of White People — she called it a “NAAWP” — be created, as modeled off the NAACP.

In the same February Facebook post, she advocated for a “Council on Christian Relations” (in response to CAIR, the Council on American-Islamic Relations). If Butt’s response to mental health concerns, rape victims’ reproductive rights, and race relations are anything to go by, she would certainly keep her council’s PR wing busy.

In case you’re wondering, the abortion bill passed 79 to 18 in the House — without the exemptions. The Senate approved it 24-2 on Wednesday. The bill now awaits the Governor’s signature.