Rose McGrath (below) just got kicked out of St. Joseph Catholic Middle School in Battle Creek, Michigan due to her poor attendance.

Why’d she miss so much school? 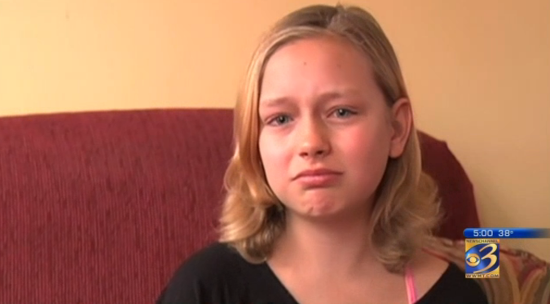 She’s been with the Battle Creek Area Catholic Schools all her life, but attending school got difficult when she was diagnosed with acute lymphoblastic leukemia in 2012.

“Even though she’s now done with her treatment you still have a very long recovery process because you’ve basically just put two and a half years of poison into your body. you’re not recovering overnight,” said Rose’s mother Barbara McGrath.

The McGraths say despite all of the obstacles, Rose was on track to pass her core classes.

School officials say they tried to reduce her workload but, at some point, they didn’t want to make any additional accommodations.

“The accommodations which were made were woefully inadequate for a child with such a serious diagnosis,” said Rose’s father Tom McGrath.

You know, it’s entirely possible that a child who misses that much school isn’t prepared to move to the next grade level. But that assumes she had every opportunity to do the work needed, and her teachers and administrators worked with her family to make that happen. We don’t know exactly what the school did and they’re not talking any more than they have to.

But I will say that, having taught at a public school, I dealt with a few students over the years who had to miss a lot of school for reasons beyond their control. Between social workers, counselors, and other teachers, we always did everything in our power to give that student every opportunity to make up the material. There are some things you can let slide and others that really are required, but I can’t remember a situation when a student, given those chances, failed to meet our expectations. They worked so much harder than everyone else because they knew everyone wanted to help them succeed.

You would think a religious school that’s all about “Christ-centered, nurturing, and disciplined education programs” would have found a way to give Rose another chance instead of bailing on her.

April 24, 2015
What Do Anti-Vaxxers Have to Say About the Latest Study Debunking Their Beliefs?
Next Post

April 24, 2015 California Educator Showed the Bill Nye/Ken Ham Debate in Class To Teach Students "Both Sides of the Argument"
Browse Our Archives
What Are Your Thoughts?leave a comment