By now, you may have heard about a storm brewing at an elementary school in Kittery, Maine. Teachers read the book I Am Jazz, an autobiographical children’s book by transgender teenager Jazz Jennings, to K-3 students. One 7-year-old reportedly asked his mother when he got home if he was transgender. 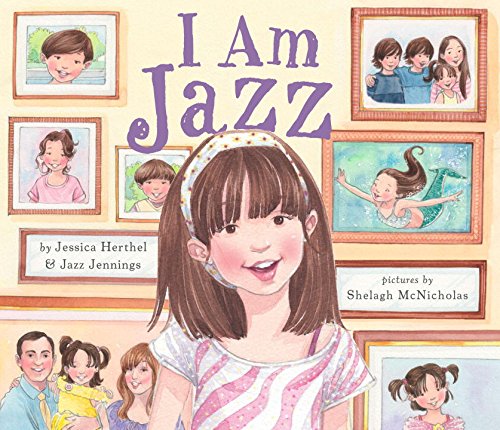 Starnes’ coverage of the incident is virtually indistinguishable from satire, so I’m going to go ahead and rewrite it so you can get a sense of what actually happened:

Fox Nation: Teachers at Mitchell Primary School in Maine read a book to the children called I Am Jazz. It’s the story about a young child with a boy’s body, but a girl’s brain.

Teachers at Mitchell Primary School in Maine read a book to the children called I Am Jazz. It’s the true story of a transgender girl named Jazz, who was assigned male at birth, but who has identified as a girl since early childhood.

Fox Nation: The transgender storytime was part of a lesson on tolerance and acceptance. Parents say they were not informed until after the fact, and one very irate mom reached out to my colleague Sean Hannity, firing off an email that reads, in part, “I feel like my thoughts, feelings and beliefs were completely ignored. My right as a parent to allow or not allow this discussion with my child was taken from me.”

The story was part of a lesson on tolerance and acceptance, universal values that help teach our children to be compassionate, caring citizens. Parents were not informed because teachers did not perceive respect for others as a “controversial” topic demanding parental pre-approval.

One very irate mom decided that the whole country should know about her anti-trans beliefs and decided Sean Hannity would be the best person to help her spread the word. She told Hannity that her anti-trans thoughts, feelings, and beliefs were completely ignored, and that her right as a parent to “allow or not allow” her child to respect transgender people was taken from her.

Of course, the story continued to blow up on Fox networks. Tammy Bruce, a guest on Fox & Friends, told host Elisabeth Hasselbeck that children should “absolutely not” learn about gender and sexual orientation and compared trans children to dogs:

“It’s insane to say that somebody has a boy’s body and a girl’s brain. What’s a girl’s brain?” Bruce added, “There was a point when I was a child I thought I was a cocker spaniel,” comparing being transgender to any number of childhood fantasies.

Transgender people, as it turns out, are not dogs. Being transgender is not “insane.” Also, this story is an autobiography. It’s true. Maybe we should invite Fox hosts to the next reading.

Fox Nation: The school apologized, said they regret not notifying parents, calling it an oversight — which is a load of bull. This is an example of a school district circumventing the rights and preferences of moms and dads, and it is a direct attack on the family.

The school apologized, and Superintendent of Schools Allyn Hutton made the following statement:

“We have a practice of if a topic is considered sensitive, parents should be informed,” Hutton said Friday morning. “In this situation, that didn’t happen. The whole culture at Mitchell School is about teaching tolerance and respect. The people presenting the lesson thought (the book) was one more piece of teaching that lesson. In retrospect, we understand that toleration is tolerating people of all opinions.”

A parent of a transgender child also reached out to media to share how meaningful the book was to their family:

“We fully support the staff of Horace Mitchell School,” the statement began. “People in this country, parents in this country are outraged by bullying, teen suicide rates and the depression in children. The staff of Mitchell School is doing something about this. By teaching acceptance and love they are shedding a light on (lesbian, gay, bisexual, transgender or questioning) issues. Reading ‘I Am Jazz’ by Jazz Jennings to students is a way of showing them that gender can be more complicated than just boys and girls. Some people are born somewhere in between. LGBTQ issues should never be classified as a ‘sensitive subject’ — there is nothing sensitive about the way we are born. Blonde hair, brown hair, gay, straight or somewhere in-between, we are all people and we all need acceptance.”

The conservative response to this show of empathy, compassion, and common decency is “a load of bull.” This is an example of right-wing media circumventing the rights of LGBT students not to be harassed or discriminated against and the responsibility of teachers to incorporate kindness and respect into their lessons, and it is a direct attack on transgender people.

Fox Nation: In what world do people think it’s okay for teachers to discuss transgenderism with a bunch of 5-year-olds? Maybe they should stick to teaching the kids how to read and write instead of deconstructing their God-given gender identity. Whatever happened to reading an old-fashioned nursery rhyme?

In what world do people think it’s okay for anti-LGBT talking heads to tell a bunch of 5-year-olds they’re crazy for being nice to each other? Maybe they should stick to teaching the kids that boys wear blue and girls wear pink and if they don’t they go to hell, instead of deconstructing toxic gender norms that drive so many youth to depression and suicide. Whatever happened to beating up the weird kid in class just because you felt like it?

Fox Nation: Back when I was in school, Jack and Jill went up the hill. But today, when Jack came down he was wearing Jill’s dress and going by the name Jackie.

Back when I was in school, I was a closeted gay kid who had no idea there was anyone around who cared about LGBT students. Because being trans is even more stigmatized than being lesbian, gay, or bisexual, I can only imagine what it felt like for my peers who were questioning their gender identity. But today, teachers are giving youth the opportunity to learn about and embrace diversity early on. We should let them.

Fox Nation: Lord only knows what the “Rub-A-Dub-Dub” three men in a tub are doing.

Lord only knows what kind of impactful change young people could create if we committed to teaching them lessons like those presented in I Am Jazz: difference is good, diversity makes us stronger, and respect is critical.

P.S.: The “Rub-a-Dub-Dub” guys, in the original version of the nursery rhyme, are ogling women. Some respect and tolerance lessons could help them, too.