Days after Grandville (Michigan) auto repair shop owner Brian Klawiter said on Facebook that he wouldn’t serve gay customers, he’s showing no signs of regret. Instead, he’s making things even worse for himself with his latest post: 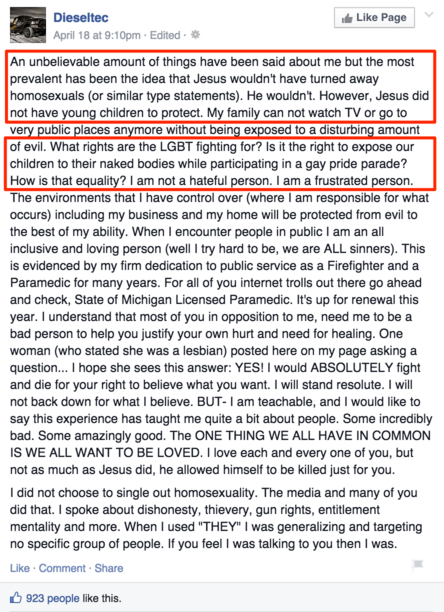 The ignorance is strong in this one…

An unbelievable amount of things have been said about me but the most prevalent has been the idea that Jesus wouldn’t have turned away homosexuals (or similar type statements). He wouldn’t. However, Jesus did not have young children to protect. My family can not watch TV or go to very public places anymore without being exposed to a disturbing amount of evil. What rights are the LGBT fighting for? Is it the right to expose our children to their naked bodies while participating in a gay pride parade? How is that equality? I am not a hateful person. I am a frustrated person.

Riiiiight. You’re doing this for the children, not because you’re a raging Christian homophobe. Sure.

Meanwhile, Klawiter’s faith-based hatred has brought a lot of unwanted attention to his business… which he’s operating without a business license. Maybe he never got it because he was too busy avoiding probation for his assault charges. It doesn’t help that he’s not making any of that sweet I’m-a-good-Christian GoFundMe money since a fundraiser on his behalf was shut down almost immediately. His Yelp reviews are pretty awful, too.

At this point, gay people paying him to fix their cars are the least of Klawiter’s problems.