11 Lies from a Christian Author’s 1978 Book About the Problems with Homosexuality April 21, 2015 Hemant Mehta

Last year, for some reason I still can’t remember, I came across a book called The Unhappy Gays by Tim LaHaye (who later wrote the Left Behind series). 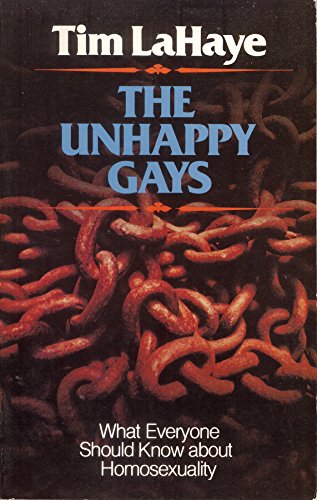 Imagine all the hateful, horrible things conservative Christians say about gay people today… and then imagine how much worse it was in 1978. That’s what’s in this book.

Over the weekend, I finally read through the whole thing… and I’m ready to bang my head against a wall now.

Here’s a sneak peek at the wisdom you’ll acquire if get the book. (I’m limiting it to 11 items only to protect my own sanity.)

1. Homosexuals live in a very different world from the rest of us.

The homosexual world and the straight world are polar opposites. until you have seen two men dancing together or two lesbians openly kissing each other on the mouth, two men affectionately embracing or a man dressed up like a woman, including false eyelashes, rouge, and lipstick, you aren’t prepared to believe that the homosexual world is a different life than anything you are familiar with. Such sights usually turn “straights” off so quickly that they look no further.

2. Homosexuals have a “hidden language” that lets them determine each other’s gender.

The same is true of a lesbian; you cannot tell by mannerisms or appearances whether she is sexually a woman or a man. homosexuals themselves can tell, if the person wants to be provocative. They have a hidden language and means of communication unknown by straights.

Through the years as I have counseled other homosexuals, I have often considered his advice, for I have never met an exception. In fact, most homosexuals are the best liars you will ever meet. Their techniques of distortion or evasion are almost impeccable. They have learned the art of deception so well that they can look you straight in the eye and tell a barefaced lie while maintaining a look of complete innocence. Many times they have outmaneuvered me.

4. Homosexuals are either angry or tense… and their parents probably don’t love them. 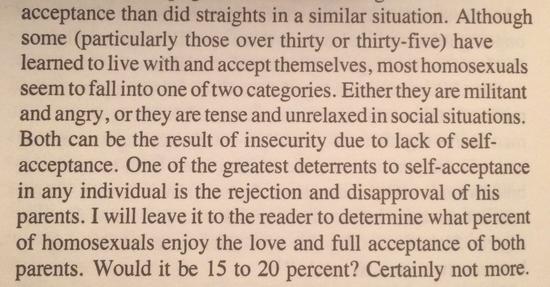 Although some (particularly those over thirty or thirty-five) have learned to live with and accept themselves, most homosexuals seem to fall into one of two categories. Either they are militant and angry, or they are tense and unrelaxed in social situations. Both can be the result of insecurity due to lack of self-acceptance. Once of the greatest deterrents to self-acceptance in any individual is the rejection and disapproval of his parents. I will leave it to the reader to determine what percent of homosexuals enjoy the love and full acceptance of both parents. Would it be 15 to 20 percent? Certainly not more.

5. Homosexuals wouldn’t exist if they had better parents.

The best way to stamp out homosexuality in this country is for parents to get back to the business of making parenthood their priority. Children raised in loving, well-disciplined homes where Mother and Father are themselves good role models for their children rarely become homosexual. Unfortunately, unloved children subjected to the selfish neglect of their parents are vulnerable to a predisposition toward homosexuality.

6. This equation determines if you’re predisposed to homosexuality. 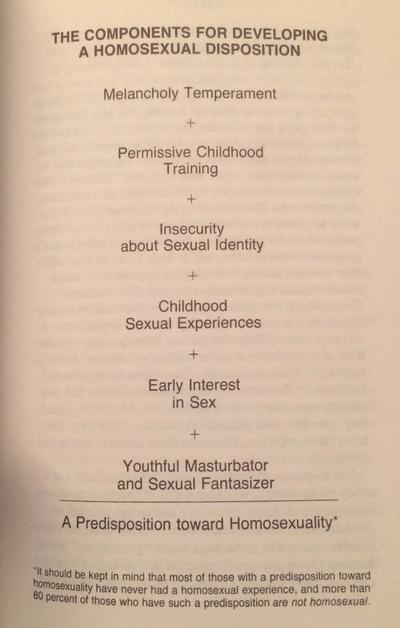 7. Homosexuals exist because they saw their parents having sex.

Parents can inadvertently contribute to this problem also. Many a sensitive homosexual was “turned off” toward heterosexual relationships because his parents were not discreet in their lovemaking, and failed to shield their small children from witnessing sexual intimacy before they were old enough to understand. It is traumatic for children to see any two people experiencing sex, but particularly their parents.

9. This equation determines if you’re a homosexual. 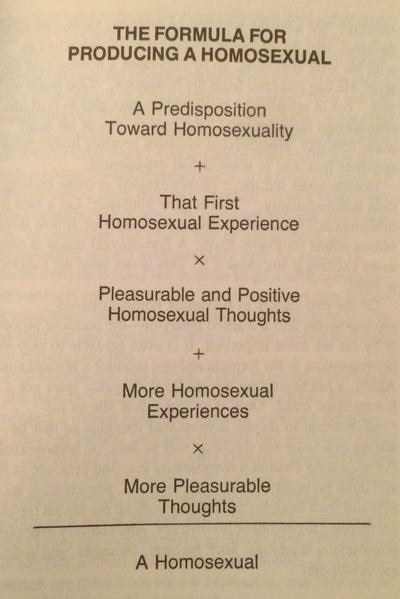 10. Homosexuals are always angry for some reason.

Anger and homosexuality are inseparable sins. Every counselor I know has detected the intense anger that churns through even the most phlegmatic homosexual. Now that you have studied the chapter on the cause of homosexuality, it should be easy to understand why homosexuals are such angry people. Probably the most psychologically destructive experience a person can have in life is rejection, and homosexuals understandably react to their multiple rejections with anger.

11. Homosexuals recruit for the survival of their species.

Most homosexuals are quick to claim that the majority of their number do not molest children or try to recruit them to a life of homosexuality, and they may be right. In fairness to them, I know homosexuals who get irate at “chicken hawks” who prey on young people and children. Nevertheless, many homosexuals (and police officials indicate that their number is increasing at an alarming rate) make it their business to recruit. As I have said before, if some homosexuals didn’t recruit, they would become extinct because they do not propagate.

Seriously. The whole book is like this. And you know some of these lies are still being spread in the conservative Christian community.

Instead of ending this post on a downer, though, I’ll leave you with a passage from the beginning of the book that had me cracking up. In it, LaHaye explains how he ended up writing the book:

Of all the words they could’ve chosen…

April 21, 2015 Swiss Native, Stonewalled by Mormon Church, Wants to Know Why His Ancestor Was Posthumously Baptized
Browse Our Archives
What Are Your Thoughts?leave a comment