You Have to Read This Hilarious, Beautiful Obituary a Woman Wrote for Her Atheist Mother April 20, 2015 Hemant Mehta

You Have to Read This Hilarious, Beautiful Obituary a Woman Wrote for Her Atheist Mother

Nina Beth Nestor died last week at the age of 85. I didn’t know her personally, but her obituary, written by daughter Diane Howard, will bring a smile to any atheist’s face: 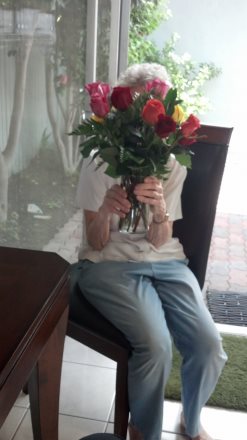 When she got diagnosed with terminal cancer she decided to just let nature take its course. Surprisingly, she didn’t die quickly as was expected. She lived for several years mystifying all of the doctors. No one had a medical explanation so one doctor sort of gestured to the heavens and she shot him down right away. Nina was an atheist and she wasn’t going to let some fantasy sky god get the credit for a mystery of medicine. Besides, they were in an exam room so the doctor wasn’t gesturing to the heavens but rather to the recessed florescent lighting above. Even adamant believers don’t think their god resides inside industrial lighting.

So, I would say “Ashes to ashes, dust to dust” except for two things: 1) That sounds a bit biblical and as I stated Nina would not approve of that. 2) Many years ago I took a biology class and when they talked about conception and birth there was no mention of ashes. Perhaps it should be “Ova to ashes.”

How great is that? The entire piece is worth reading.

Diane said she showed the obituary to her mother “months before she died and she loved it, thought it was hysterical and… said I should publish it.”

I’m glad she did.

By the way, Diane’s mother hated having her picture taken, but allowed it last year when her son sent flowers on her birthday. Diane was kind enough to let me post it here.

April 20, 2015
Ohio Gov. John Kasich on a Possible Presidential Run: "I'm Trying to Determine If This Is What the Lord Wants"
Next Post

April 20, 2015 Did Ted Cruz Really Say That "There Is No Place For Gays or Atheists In My America"? (Spoiler: No He Didn't)
"Real Christians, pffft... You mean, "TRUE Christians", of course!"
TS the Awesome Scott Lively: I Asked God to ..."
"Woot!! Really? Cool :-)"
TS the Awesome Scott Lively: I Asked God to ..."
""....there are still plenty of hints that the misogyny was hardly a one-time occurrence. "It ..."
Satanic Donut Baptist Pastor Who Told Wives to ..."
"Historically property qualifications required holding a certain value of freehold and a higher value leased."
Mike Meredith MAGA Cultist: “I’ll Admit It. I ..."
Browse Our Archives
What Are Your Thoughts?leave a comment