Ohio Gov. John Kasich on a Possible Presidential Run: “I’m Trying to Determine If This Is What the Lord Wants” April 20, 2015 Hemant Mehta

Ohio Gov. John Kasich on a Possible Presidential Run: “I’m Trying to Determine If This Is What the Lord Wants”

Ohio Governor John Kasich (below) said on Meet the Press yesterday that he’s waiting for God to tell him whether or not to seek the Republican nomination for President. 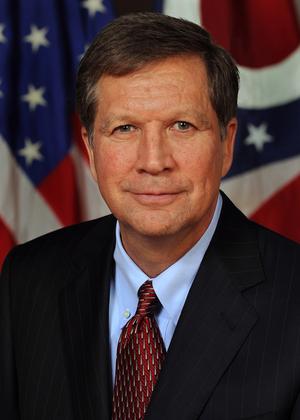 “I’m trying to determine if this is what the Lord wants,” said Kasich. “I’m not going to find that out lying in bed hoping lightning strikes, so I’m out there, one foot in front of another aggressively.

You know, considering that Sen. Ted Cruz made his campaign announcement at fundamentalist haven Liberty University, and Florida Gov. Jeb Bush will soon give a commencement address at the same school, and Mike Huckabee‘s still waiting for God’s return phone call, and Sen. Rand Paul announced his candidacy “with God’s help,” and Sen. Marco Rubio believes “God is with you wherever you go,” and Dr. Ben Carson says he feels God’s fingers pushing him toward a run, I think I can help Gov. Kasich.

God wants you to run.

God wants all the Republican candidates to fight for His love.

God never says “No” to politicians asking whether they should embark on a Presidential run.

And then, as we’ve seen from the past couple of election cycles, God votes for the Democrat.

April 20, 2015 You Have to Read This Hilarious, Beautiful Obituary a Woman Wrote for Her Atheist Mother
Browse Our Archives
What Are Your Thoughts?leave a comment