West explained that he never got injured when he played high school football because there was a team prayer before the games: 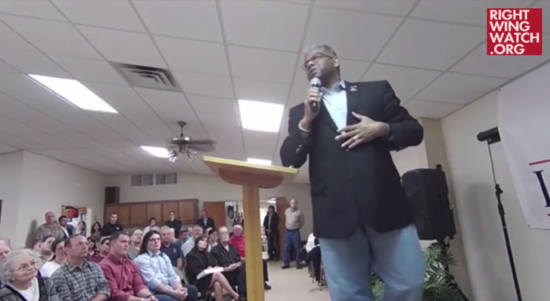 Now see, I remember growing up in the inner city of Atlanta, Georgia. I went to Grady High School and I played football. And we didn’t have all this high-speed gear and everything like that. There was no such thing about “targeting.” I mean, you were not a tough football player unless you did try to hit someone head-on.

And even in high school, before every game at Grady Stadium, the pastor would come down and pray over that football game. I don’t remember catastrophic injuries. I don’t remember anyone getting carted off that field paralyzed.

Miranda Blue at Right Wing Watch notes that football injuries have been going on for a long time — far before the Supreme Court banned school-sponsored Bible readings at public schools.

Also, keep in mind that professional football teams have their own chaplains… and the NFL isn’t exactly known for its injury prevention.

Not that West cares. Even when he’s not in office, he’s still pandering to religious conservatives with lies.

April 20, 2015 How the FDA Can More Effectively Regulate Homeopathic Products
Browse Our Archives
What Are Your Thoughts?leave a comment