In the January, 2015 edition of the Jehovah’s Witnesses publication Awake!, a professor was quoted as saying many scientists doubted the theory of evolution. 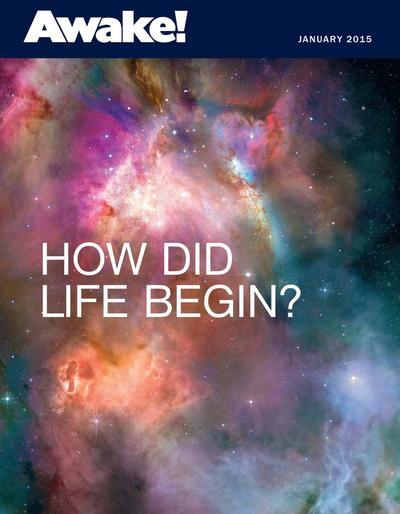 It happened in the very first section of the issue: 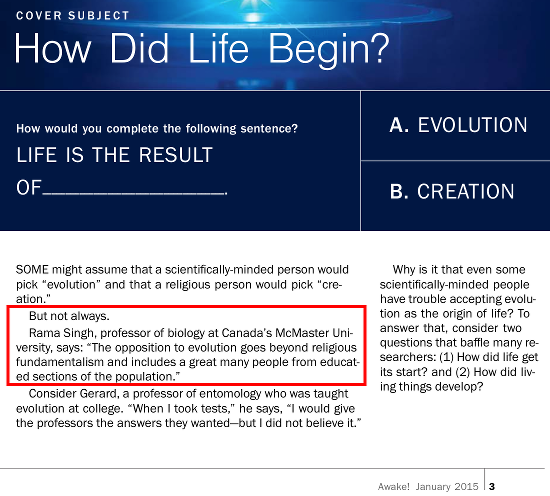 Rama Singh, professor of biology at Canada’s McMaster University, says: “The opposition to evolution goes beyond religious fundamentalism and includes a great many people from educated sections of the population.”

Singh said evolution is doubted by educated people for reasons that have nothing to do with religion? And we’re talking about a “great many people”?

That’d be shocking… if it were true.

But Misha Anouk, the founder of the site JW Alumni, knew better than to just accept whatever a Church publication told him. So he contacted Singh to find out if that was a fair and in-context quotation.

Not only did Singh tell Anouk he was intentionally misquoted, he wrote a damning open letter to the editor of Awake!:

Contrary to what you imply, I do not support a creationist view, nor do I suggest that even a minority of scientists support such a view. Anyone who reads my article can see that I fully support the theory of evolution (Singh 2011).

Your misquotation amounts to intellectual dishonesty and reflects on your character and dignity as editor as well as a man of God. I can understand that you do not accept evolution as an explanation for the biodiversity on this planet, but I cannot understand why you would knowingly misuse a scientist’s work to make him appear supporting the creationist point of view.

So where did Awake! even get that information? Singh’s 2011 article said that a lot of smart people don’t accept evolution for reasons other than religion… because they don’t actually understand evolution. The same article went on to suggest that colleges should make evolution a mandatory course.

This is a perfect example of someone taking a scientist’s words out of context to prove the exact opposite point. It’s dishonest, it’s deceptive, and I guess it’s justified (to the JWs) because it’s done in the name of God.

It wasn’t the only bit of dishonesty on the page. In the very next paragraph, Awake! mentioned another evolution-doubting professor: 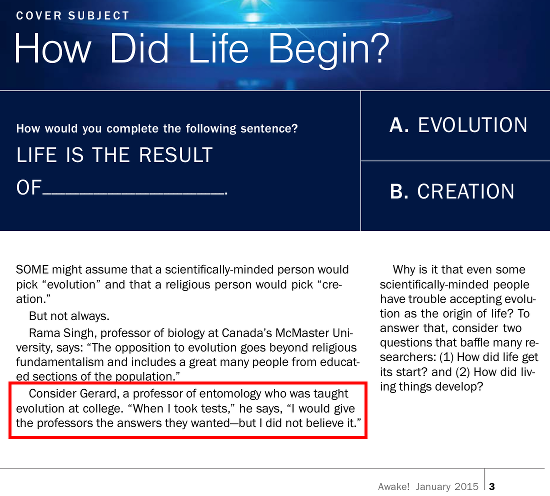 Consider Gerard, a professor of entomology who was taught evolution at college. “When I took tests,” he says, “I would give the professors the answers they wanted — but I did not believe it.”

It turned out that non-English-language versions of the magazine included the professor’s full name: Gerard Hertel. And while Hertel’s quotation was accurate, the magazine left out a relevant bit of information that was discovered elsewhere:

In other words, he’s one of them. Not exactly an unbiased source.

This is what religious propaganda looks like. They can’t rely on science or evidence, so they resort to bullshit.

But back to the misquoting of Professor Singh.

That story really made the rounds, to the point where even the Jehovah’s Witnesses higher-ups couldn’t ignore it.

Instead of apologizing, though, they just went back and altered the digital version of their magazine, removing any reference to Professor Singh and presumably hoping nobody would notice. 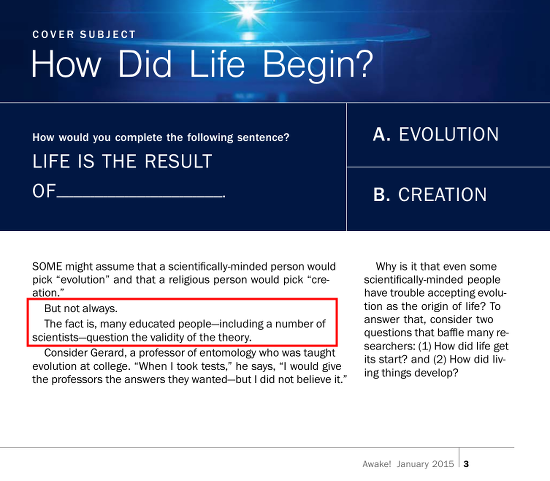 There’s no apology or mention of the edit. (And they still wrongly suggest many educated people doubt the validity of evolution!) Apparently, the foreign-language and audio versions of the publication have not yet been “fixed.”

Despite professing “Christlike humility,” the “spiritual men” who work on the Governing Body’s Writing Committee are not renowned for their willingness to issue apologies or print retractions.

Needless to say, the whole affair smacks of hypocrisy. A religion that is the first to point the finger at others for deception and subterfuge is not above stooping to such methods if it means duping people into embracing their backwards views.

He notes that this also contradicts what was written in the JW 2011 Yearbook:

In summary, the Writing Department insists on using only material that is accurate and truthful, even regarding seemingly insignificant details. As a result, ‘the faithful and discreet slave’ can consistently supply spiritual food that brings honor to ‘the God of truth,’ Jehovah.–Ps. 31:5.

Religious people being hypocrites? I’m stunned, I tell you. Stunned.

April 20, 2015
The L.A. Times Comes Up Empty in New Search For Motive in Chapel Hill Killings of Three Young Muslims
Next Post

April 20, 2015 Former Rep. Allen West: Church/State Separation is Responsible for Football Injuries
Browse Our Archives
What Are Your Thoughts?leave a comment