CBS Sunday Morning aired an excellent segment this morning on the Openly Secular campaign and the difficulties of coming out as an atheist whether it’s due to skin color, geography, or just plain fear.

My friend Neil Carter, who blogs at Godless in Dixie, was featured in it (and did an excellent job). So was philanthropist Todd Stiefel (below) and Mandisa Thomas of Black Nonbelievers. 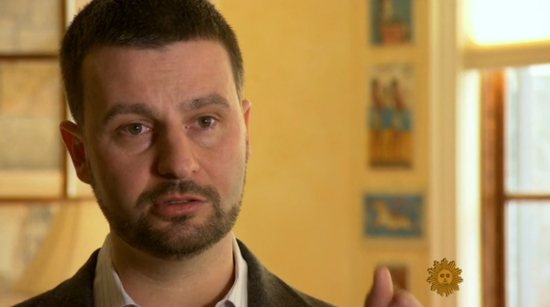 [Mo] Rocca asked, “How did [your students] find out that you’re an atheist?”

“One of them had been stalking me on Facebook and saw that I had ‘liked’ a page about atheism,” Carter said. “And then she came to school the next day and started asking me in front of the students if I was an atheist, and I refused to answer the question, which to them was enough of an answer.”

The principal soon instructed him never to discuss anything to do with religion in class. And shortly after, he was transferred. “First, they moved me out of my classroom to a math class,” he said. “And then after that, they just told me they wouldn’t bring me back the next school year. They didn’t really give me any reasons, but obviously I knew what the reason was.”

We don’t know for certain why Carter was transferred. No reason was documented, and his school declined to talk with CBS News.

Yes, Americans are religious, particularly in the South, which is why it’s called the Bible Belt. Black Americans are especially devout. Nearly 9 in 10 African-Americans believe with certainty that God exists.

Which is why Rocca said to Mandisa Thomas, “Candidly, when I think ‘atheist,’ I don’t picture you.”

“Yeah, you might picture an old white guy,” laughed Thomas, an events services manager in a suburb of Atlanta, Georgia.

In less than 10 minutes, the segment showcased more diversity than last month’s hour-long CNN documentary. Lots of blunt voices, too.

The part about how some people keep two Facebook pages — one that family members can see and another secret one that lets you be honest about your atheism — really got to me.

Kudos to Mo Rocca for featuring atheist voices we’re not used to seeing in the mainstream media and sharing a couple of really compelling stories in the process.

April 19, 2015
Mike Huckabee: The Military is Too Hostile to Christians, So Don't Enlist Until Obama Leaves Office
Next Post