What To Do (and What Not To Do) If Someone Threatens Your Kid with Hell April 17, 2015 Hemant Mehta

Suppose you’re a non-believer and someone tells your child that he will go to Hell for not believing a certain thing or because he’s not baptized. What do you do? 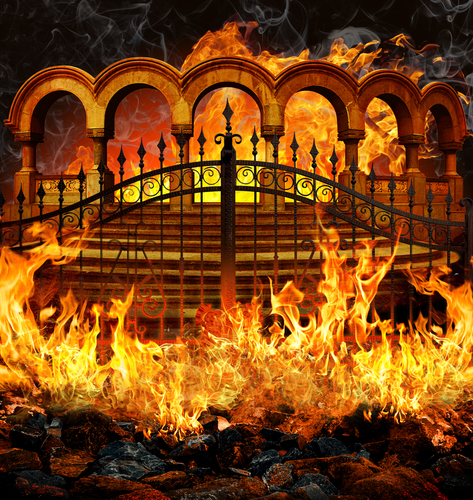 Whether it’s at school, or with friends, or at a religious event of some kind, if you know children who aren’t being raised (some may say indoctrinated) with a particular religion, this situation is bound to arise.

That’s partly because the idea of Hell is associated with many religions, so no matter where you live or who your kids associate with, it’s likely they will meet somebody who believes in it. In Christianity, it’s called Hell. In Islam, it’s called “Jahannam.” But it’s all the same in practice.

The second reason this issue is common is that kids will be kids. If they are taught that Hell is real and that non-believers will be sent there, there’s a chance they will bring it up to their classmates and friends who they think fit those descriptions. And children who are threatened with Hell will be kids, too. That is to say that, because they often don’t know any better, they may be scared that this place is real and that they should do anything they can to avoid it.

That’s where you come in.

What you should do:

What you shouldn’t do:

I think most non-believers would say that teaching children that they will suffer for an eternity based on their beliefs is a form of child abuse, and it’s important to note that many believers would themselves agree. But for some people who believe in Hell, they think they are just reporting what they know to be true when they teach their kids about its fiery depths. A quick Google search of “things to tell your children about hell” reveals, for example, that the top Christian parenting result recommends eight things “kids should know about Hell.” These things include “The Bible speaks of hell in many places,” “Hell is a place of annihilation or never-ending punishment,” and “No passage in the Bible says that there will be a second chance after death to turn to Jesus…”

So, whether we like it or not, belief in heavens and hells and other afterlives is commonplace in many cultures and will likely continue to be so for the foreseeable future. These concepts are created because people fear death and wish for ongoing life, as well as because of our inner quest for “justice,” and we don’t need to stop them entirely. We should, however, be able to understand and explain these beliefs in the proper context and eliminate whatever power they hold over us and our children.

April 17, 2015
A Public High School in Georgia Just Had a Local Church "Present the Gospel" to Students
Next Post