If This Man Gets His Way, There Will Soon Be a Replica of Noah’s Ark in Jacksonville April 17, 2015 Hemant Mehta

If This Man Gets His Way, There Will Soon Be a Replica of Noah’s Ark in Jacksonville

Watch out, Ken Ham. You have company.

The city of Jacksonville, Florida is trying to sell off a huge 40-acre tract of land (the Shipyards) near downtown and they’re currently taking bids from developers.

Option 2: Shitaki Marine wants to create a “docking facility for mega-yachts.” Because the wealthiest people in the world need more parking spaces.

Option 3: In Him, LLC wants to create a replica of Noah’s Ark.

No, for real. That’s what owner Stephen Grenda wants. Even though he has no money to invest. 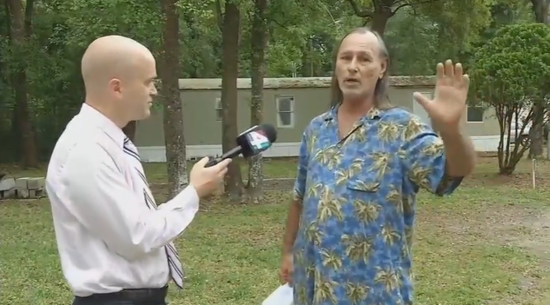 The address for In Him LLC. leads to a trailer in a northwest Jacksonville mobile home park, where a man named Stephen Grenda was supposed to operate the company.

Grenda said that God has chosen him to develop the shipyards and wants to build a replica of Noah’s Ark.

“Yeah, there’s also going to be a healing temple there, and there’s going to be nurses, close to two nurses,” Grenda said. “[And a] volleyball court. I love volleyball.”

Local journalists are having a field day with this. One reporter even scored an in-depth interview with Grenda:

What are your plans for the Shipyards?

“It’s a place where Christian believers can come together and meet with one another and spread the word of God. Along with the healing temple — which will be about 50 to 60 feet wide, and include five fully-equipped hospices with on-duty nurses and an oncologist — there will be a couple of volleyball courts, picnic tables with barbecues, as well as a life-size replica of Noah’s Ark that would house a restaurant on top of the deck, with outside seating. And below, where the animals would be, will be a concert hall for Christian music. While the concerts are being held, the restaurant will be closed because of weight issues. The heavier equipment, such as the stoves, will be on the ground floor and we’ll use a large stainless steel dumbwaiter to bring the food up. The ark will be 531 feet long.”

How will you fund this project?

“I’ve been looking with Realtors for a piece of property big enough for the plans. And the Shipyards came up and the Lord told me to write a proposal because he wanted the site to be the land where he could show his glory. I asked the Lord how much? I said, ‘$3 million’ and the Lord said, ‘No, $13.5 million.’ The Lord said his children would pay for it and that I didn’t have to worry about it. I would act as his service manager. Any money that comes out after everybody is paid off will all go to the city. I estimate between $58 billion to $200 billon-plus a year will go to the city. And, of course, I would be there working, not around the clock, but I’d be there.”

Somehow, I don’t think the city’s going to go for his proposal… even though Grenda says he would just start a GoFundMe campaign to raise the money. (As we all know, Christians have to treat gay people like shit before the GoFundMe cash comes pouring in.)

A vote is tentatively set for April 30.

April 17, 2015
I Love the Woman Invoking the "Religious Freedom" Argument to Keep Feeding the Homeless... but She's Still Wrong
Next Post

April 17, 2015 Cochran (Georgia) City Council Will Hoist Christian Flag Above Courthouse, Against Attorney's Advice
"For a split second, I wondered what "anal" had to do with this.There's too many ..."
CanuckAmuck Evangelical Pastor Faces Prison Time After ..."
"What also needs to happen is for more members to leave the church because said ..."
Skeptical_Inquirer Evangelical Pastor Faces Prison Time After ..."
"That's not at all what we're talking about here. Fluidity? Do you even know any ..."
Houndentenor Beth Moore Apologizes for Being “Complicit” ..."
"That's not what this means. Yes, people in a relationship often have skills and traits ..."
Houndentenor Beth Moore Apologizes for Being “Complicit” ..."
Browse Our Archives
What Are Your Thoughts?leave a comment