For nearly a decade, Joan Cheever (below) has been handing out food to the homeless in San Antonio, but she was given a ticket last week: 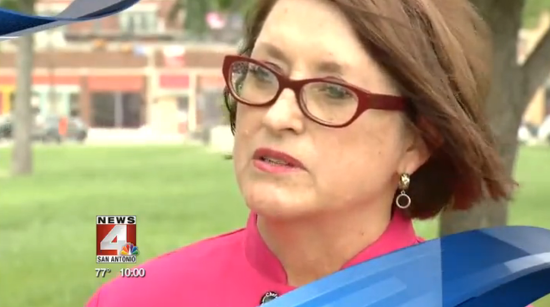 Cheever has a food permit for her mobile truck, but she was cited for transporting and serving the food from a vehicle other than that truck.

To be sure, this is a safety precaution. The cops did exactly what they were supposed to do. Sure, it’s frustrating when someone who’s trying to help those less fortunate is punished for something so minor, but that’s why she received a permit in the first place: So she could do this the right way. (The fact that people would easily donate to help her pay the ticket, which could cost up to $2,000, is irrelevant.)

Here’s the interesting part: Cheever claims that the same “religious freedom” law used by Christian florists to deny services to gay customers should get her off the hook, too:

When she goes to court on June 23, she said, she will argue that she should be allowed to continue sharing her food because it is a valid expression of her faith under the state’s Religious Freedom Restoration Act.

“You can’t just turn away from your neighbor when they’re in need,” she said. “We don’t do that in San Antonio.”

Despite the almost-universal support for her, I don’t believe she should be able to get away with it. Her religious beliefs may compel her to serve those in need, but the government has an interest in making sure food is properly prepared and delivered, and she was trying to bypass the system. She has a permit, she didn’t use it, she was punished. That’s how it works.

The fine shouldn’t disappear just because she’s Christian when atheists doing the exact same thing would be forced to pay it because they’re following their conscience instead.

But there’s a larger point here. For all the bad press RFRA has received over the past few months, it would be a lot harder for liberals to argue against the religious freedom laws if they were being used to defend charity. Instead, “religious freedom” has become virtually synonymous with discriminating against the LGBT community. So kudos to Cheever for taking a law that Christians have been using as a cudgel and changing up the storyline.

April 17, 2015 If This Man Gets His Way, There Will Soon Be a Replica of Noah's Ark in Jacksonville
"“Jude-Christian values”. Drink!"
Rational Human GOP Senate Candidate Pushes for a ..."
"https://uploads.disquscdn.c..."
some b@st@rd on the internet For Many Christian Women Raised in ..."
"They thought they were living in an escapist movie. All you have to do is ..."
Juniper A Capitol Rioter Was Arrested After ..."
"OT:Question: Could you ever get behind a vaccine mandate for everybody? Ron Johnson(the senior United ..."
starskeptic For Many Christian Women Raised in ..."
Browse Our Archives
What Are Your Thoughts?leave a comment