Doonesbury Creator Garry Trudeau Again Attacks Anti-Islam Cartoons, Instead of Those Who Murder Over Them April 16, 2015 Terry Firma

Doonesbury Creator Garry Trudeau Again Attacks Anti-Islam Cartoons, Instead of Those Who Murder Over Them

It wasn’t new territory for him. After the violence over the 2005 Danish Mohammed cartoons broke out, Trudeau, disappointingly, pronounced his solidarity with, or at least his patient understanding of, the rioters. He rejects cartoons that are critical of Islam, he explained at the time, because he sees making a statement about freedom of speech by drawing even the mildest representation of Islam’s prophet as a useless, empty gesture.

“What exactly would that statement be?” he rhetorically asked an interviewer of the Santa Barbara Independent.

That we can say whatever we want in the West? Everyone already knows that. So then the question becomes, should we say whatever we want? That, to me, is the crux. Do you hurt people just because you can? Because you feel they shouldn’t be deeply hurt, does that mean they aren’t? Should the New York Times run vicious caricatures of blacks and Jews just to show the First Amendment in action? At some point, common sense and sensitivity have to be brought to bear.

Huh. So we can “say whatever we want” in Western democracies, Trudeau claims; “Everyone already knows that.” I guess that excludes Theo van Gogh and Lars Vilks and Salman Rushdie and Stéphane Charbonnier, among other artists. After all, their right to speak their minds has been partially or entirely abrogated either by their actual murders (van Gogh and Charbonnier), or by ongoing attempts on their lives (Rushdie, Vilks). 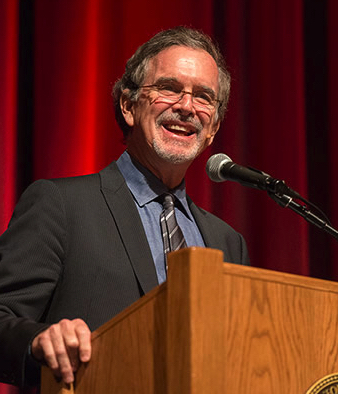 As for “Do you hurt people just because you can?”, maybe that question is best asked not of non-violent artists who merely put pen to paper, but of the Islamist machine-gunners, fire-bombers, and knife-plungers who seek to snuff out critics who openly laugh at Islam.

And don’t even get me started on Trudeau’s appeal to “common sense and sensitivity.” By any chance, do religious assassins have more of those qualities than their victims do? Does Trudeau ask the murderers and their millions of supporters about their “common sense” and their “sensitivity” to others? It would seem not.

Back when he spoke out against the Danish drawings, no cartoonists had yet been murdered. After this past January, when Islamic terrorists taught Charlie Hebdo‘s staff a lesson by washing the walls of the editorial offices with their victims’ blood, you might think that Mister Doonesbury perhaps changed his tune.

No dice. Here’s what he said in his acceptance speech on Friday.

Traditionally, satire has comforted the afflicted while afflicting the comfortable. Satire punches up, against authority of all kinds, the little guy against the powerful. Great French satirists like Molière and Daumier always punched up, holding up the self-satisfied and hypocritical to ridicule. Ridiculing the non-privileged is almost never funny — it’s just mean.

Does he really intend to say that Muslims like the Kouachi brothers were neither “self-satisfied” nor “hypocritical”? Those qualities describe every religious group that thinks it has a monopoly on spiritual truth and seeks to spread it by any means necessary.

Moreover, there are roughly 1.5 billion Muslims in the world. They are on track to become the earth’s biggest religious tribe in just a few decades. In about two dozen Muslim-majority countries, they already have all the power and privilege you can imagine. In nations like Saudi Arabia and Brunei and the United Arab Emirates, the upper classes — those in power — also have more money than you or I can even comprehend.

Even where broad swaths of Muslims don’t have wealth or political influence, as is the case for the majority of Allah worshippers in Europe, they certainly acquire a great deal of power once some begin to don ski masks and equip themselves with AK-47’s. The moment the Kouachis barged into the Charlie Hebdo offices, guns at the ready, they were no longer the underdog, the afflicted, the non-privileged (if they ever were). That role had transferred to the virtually defenseless Charbonnier and his crew. Power can and does most definitely come from the barrel of a gun. To say that a drawing is more destructive, a greater exercise of naked power, than bullets tearing into flesh and bone, is to be obtuse in the extreme.

By punching downward, by attacking a powerless, disenfranchised minority with crude, vulgar drawings closer to graffiti than cartoons, Charlie wandered into the realm of hate speech, which in France is only illegal if it directly incites violence. Well, voila — the 7 million copies that were published following the killings did exactly that, triggering violent protests across the Muslim world, including one in Niger, in which ten people died. Meanwhile, the French government kept busy rounding up and arresting over 100 Muslims who had foolishly used their freedom of speech to express their support of the attacks.

That last sentence is the only one where I find myself in agreement with Trudeau. I’ve written about the French double standard here and here.

The rest is victim-blaming at its worst.

If even the publication of a drawing that may be the most conciliatory ever to be printed on a Charlie cover — the cover text was “All is forgiven” — I wouldn’t put the blame for the subsequent bloodshed on the publisher or the artist. I’d put it on the Allah fans who again chose to demonstrate that too many Muslims are full of murderous rage that can be set off by a handful of mild squiggles on a piece of paper.

What free speech absolutists have failed to acknowledge is that because one has the right to offend a group does not mean that one must. Or that that group gives up the right to be outraged. They’re allowed to feel pain. Freedom should always be discussed within the context of responsibility. At some point free expression absolutism becomes childish and unserious. It becomes its own kind of fanaticism.

Of course, outrage is fine. Hell, I’m outraged by Trudeau’s failure to stick up for colleagues who were slaughtered for the crime of drawing provocative pictures (the very activity that Trudeau has made a lucrative career out of doing).

Consequently, I may express my feelings by rebutting and denouncing him. If I were a regular buyer of his books, I could also stop giving him my money. I could even call for a boycott of his work. All of that is fair game.

What I may and will not do is murder him.

As for the charge of fanaticism, I wonder what Trudeau reckons is more fanatical: Drawing pictures lampooning a ridiculous religion (sorry for the tautology), or pumping someone full of holes.

People who push repugnant, evil things — the murder of gay citizens, the execution of blasphemers and apostates, the second-class status of girls and women — richly deserve our contempt and ridicule, and I don’t give a damn what part of the socio-economic spectrum they’re from. Among Muslims, such advocates may or may not be a majority (this depends on where you ask); but at the very least they form, overall, a significant minority that includes both rich and poor. It’s not their wealth or lack thereof that I have a problem with; it’s the twisted, violent, medieval ideology they espouse.

At the Atlantic, David Frum has more.

April 16, 2015
KosherSwitch: A Loophole for Orthodox Jews Who Think They Can't Turn Electricity On/Off on the Sabbath
Next Post