Why Are Atheists Protesting Outside a Wells Fargo Bank in Las Vegas Later Today?

Last year, John Whiteside (below) was discriminated against at a Wells Fargo branch due to his atheism. At least that’s the way he sees it. 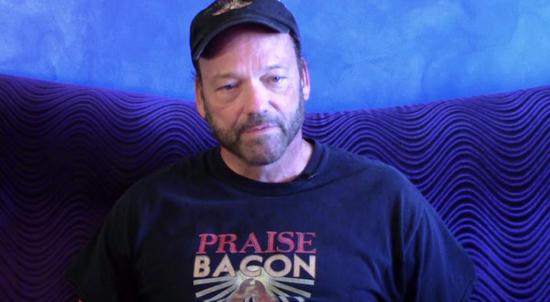 He’s the President of the United Church of Bacon — a group whose purpose is, in large part, highlighting the perks of being a church in order to promote church/state separation — and he was in need of a notary (meaning a state-sanctioned witness to attest to him signing a document). So he went to the bank, showed his ID, and everything was fine until the worker noticed the name of the church:

He was there to get a notary’s stamp on a state affidavit one of his congregants needed to officiate marriages.

But Whiteside said the woman at the bank refused to notarize the document for no other reason than “discrimination against those who don’t believe in God.”

It didn’t help that the UCB didn’t have an account at the bank, since they don’t accept any money, even though other churches do. So without being there myself, there’s a lot of confusion going around that may have played a role in why Whiteside didn’t get proper service. Maybe the employee just thought she was getting played and didn’t want to fall for some prank.

If someone came to me saying they represented the United Church of Bacon, my first instinct might be to say, “Sure you do… Get the hell out of here.” But once Whiteside proved that he represented a legitimate organization, the confusion should’ve stopped and the document notarized. Instead, Whiteside had to go to a different Wells Fargo branch to get what he needed.

To compound his problems, he appealed to bank management and the Nevada Equal Rights Commission… and neither of them took his complaint seriously. (Perhaps because he got his document notarized by another Wells Fargo branch — so they didn’t see any anti-atheist discrimination within the company — and didn’t feel a need to do anything else in response.)

Wells Fargo denies any wrongdoing, saying in a statement:

“Wells Fargo believes discrimination of any kind and against any group or customer base is wrong and we categorically deny the claims brought forth by Mr. Whiteside,” the company said in a statement. “We have a long history of supporting and serving the needs of a widely diverse customer base in Nevada and throughout the country. We regret that this organization and Mr. Whiteside have decided to target Wells Fargo as a means to further their agenda.”

Well, Whiteside isn’t going to win any friends there because he’s staging a protest outside the bank later today in response to how he’s been treated — with the presence of several leaders from national atheist groups.

“This is how discrimination works,” said Johnny Monsarrat, Alliance Director of the Secular Policy Institute. “They can try to make excuses, but John’s church has the same rights as others and should not have been denied. What’s the point of Wells Fargo’s non-discrimination policy if their staff can violate it?”

Collectively the leaders will gather next week to demand that Wells Fargo retrain employees to address atheophobia and secularphobia, affirming that their zero tolerance policy for discrimination also protects atheists. They will meet on Wednesday, April 15th at the Wells Fargo located at 1121 South Las Vegas Blvd, Las Vegas, at 4:30 p.m. They will close their Wells Fargo accounts and issue a warning to Wells Fargo that secular people cannot be ignored. They represent 20% of the US population.

I’ve read a few different articles about this protest — from the group and local journalists — and I have yet to see any evidence of serious problems with the bank itself.

The staffer should’ve handled it differently, absolutely, but I have a hunch that if Whiteside represented the “Atheists of Las Vegas,” he would’ve been treated just fine, which would put to rest any notion of anti-atheist discrimination.

For that reason, this whole protest just seems completely overblown. So is the suggestion for atheists to close their accounts with the bank.

Whiteside is trying to scratch an itch with a cheese grater.

His Change.org petition has 340 signatures as of this writing. And there’s a billboard — four of them, actually — which I freely admit would be hilarious on their own, but are meant to stir up interest in the protest:

To be clear, I’m all for stopping anti-atheist discrimination wherever it is. But there’s just no evidence that (1) this is a systemic problem within the company or (2) even a problem at this one particular branch.

What Whiteside is doing, in their view, probably seems like overkill.

That said, I’m not sure why Wells Fargo can’t just issue a direct apology for how a customer was treated. It seems ridiculously easy to just say, “We’re sorry for how Mr. Whiteside was treated, and we assure you it won’t happen again. If the United Church of Bacon ever needs anything notarized, we’d be happy to provide that service to him.”

April 15, 2015
How Amy Schumer Survived a Haunted Hotel
Next Post

April 15, 2015 Thanks to Attorney General Supporting Bible Distributions in Oklahoma Schools, Satanists May Get in on the Action
Browse Our Archives
What Are Your Thoughts?leave a comment