Bill O’Reilly: Christians Are Being Killed in America… Verbally

In a pleasant twist, though, the lack of persecution is exactly the point Stossel made to a host who doesn’t often get challenged on this issue. 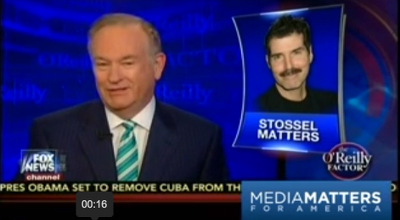 Stossel: Your “War on Christianity”… you’re just a 10-foot-tall crybaby.

Stossel: It’s not so bad. Christians aren’t being killed.

Stossel: And not in America, and they’re not going to be.

O’Reilly: Wait a minute, Stossel! C’mon, now. You shouldn’t be diminished because you believe a certain way. Aren’t you outraged by that?

Stossel: [Stares] No… I mean, what’s diminished? 83% of the country says they are Christians.

Stossel: You are the majority. You’ve won!

Look, if Christians want respect, they need to believe things worth respecting. But a verbal disagreement over ideas is exactly what we should be having. Sure as hell beats physical violence as we see in other places (or anything resembling a “war”).

It’s not often I get to say this, but Stossel has a good point. Christians have very little to worry about. If they feel under attack, it’s only because they’re not used to being challenged on their bad ideas. Some Christians may be called bigots, but they still have it much better than the LGBT people they prevent from having equal rights.

If Christians were treated by the rest of America the way some Christians treat gay people, they might have a point. Until then, they have virtually nothing to complain about.