Humanist Delivers Invocation in Washington House: “We Are All Sharing the Same Speck of Dust” in This Universe April 14, 2015 Hemant Mehta

Humanist Delivers Invocation in Washington House: “We Are All Sharing the Same Speck of Dust” in This Universe

Yesterday morning in the Washington State House of Representations, the opening invocation was delivered by Robert Ray, President of the Humanists of North Puget Sound: 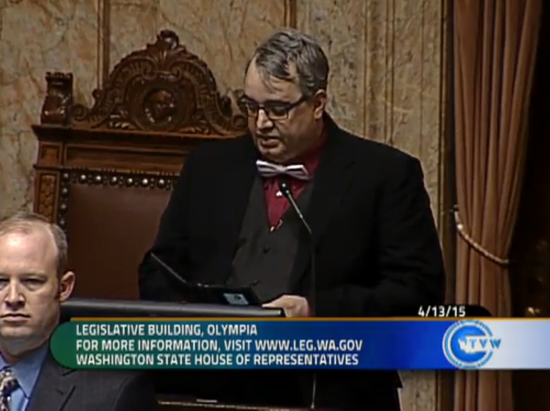 I would like to open this invocation by asking everyone, look around you. Beside you, in front of you, and behind you, is a person that is, in so many ways, the same as you. We may have different backgrounds and beliefs. We may come from different ethnicities and religions. But when it comes down to it, we are all sharing the same speck of dust floating through this vast and wondrous universe.

Many have come before this chamber to speak of their faith. But I would, instead, like to speak of trust. Of trust in humanity, trust in the fundamental good will within people. Trust that we all yearn to make the world a better place. Trust that some can answer a higher calling. A calling many of us have in common. That is: to serve our fellow humans to the best of our ability. I trust that everyone in this chamber has felt this or you would not be here.

With that being said, I also ask that you use your trust in the same way I have described. Reach out to one another. Try to understand and have empathy with those you may disagree with. Make an honest attempt at compromise, for that is what our secular government is based on.

With today being the 272nd birthday of Thomas Jefferson, I felt I should honor his memory with a quote:

“He who receives an idea from me, receives instruction himself without lessening mine; as he who lights his taper at mine, receives light without darkening me.”

So thank you for this opportunity to bring my message of trust, humanity, and Humanism into this chamber.

And I will end with this simple phrase:

No walkouts or protests as far as I could tell.

April 14, 2015 Georgia Lawmaker Rewrites Bill to Offer $350,000 in Tax Breaks to Christian School Where He's a Trustee
Browse Our Archives
What Are Your Thoughts?leave a comment