Why Are Stained-Glass Windows with Religious References Up in This Public University’s Library? April 13, 2015 Hemant Mehta

Why Are Stained-Glass Windows with Religious References Up in This Public University’s Library?

Southern Connecticut State University just did a bit of redecorating for the Hilton C. Buley Library on campus… and they installed some stained-glass windows with religious phrases and figures on them: 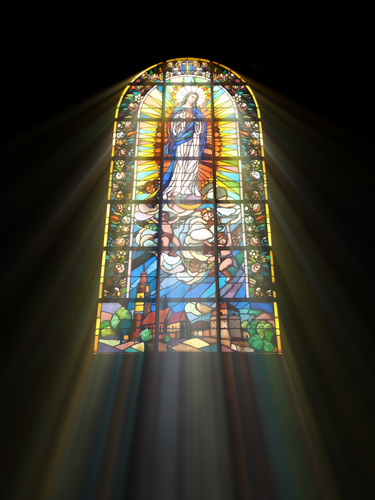 [The] three windows that have caught more than one person’s eye, not only for their color or brightness but because they all feature a Christian religious figure or phrase or both.

If a complaint on this particular decision… was brought to Americans United for Separation of Church and State they would consider the religious windows a violation of law.

One of the examples of a violation on AU.org says that “… displays of a religious symbol or text on public property”… are a violation.

Since SCSU is a public state university [it] does make it inappropriate and gives students the right to question and even complain.

One of the librarians said the windows were given to them as a donation a while back — together, they’re estimated to be worth more than $100,000 — but the library isn’t a museum. You have to wonder whether they would be as welcoming of artwork featuring non-Christian messages.

The way they acquired the windows, however, probably won’t matter if a complaint is filed.

(Image via Dawid Lech / Shutterstock.com. Thanks to Brian for the link)

April 13, 2015
Rep. Louie Gohmert: "Christians Are the Only Group in America" That It's Okay to "Abuse and Misuse"
Next Post

April 13, 2015 Should a Texas County Issue $350,000,000 in Bonds to Improve Roads? The Answer May Depend on God
"we are genetically programmed to take more risks since we are so much less important ..."
crackerMF Woman Injured After Falling 20 Ft. ..."
"A few seconds . . . that was my limit, still is."
David This Heavy Metal Remix of Televangelists ..."
"Don't forget the old why buy the cow if the milk is free slander. Tells ..."
Fafnir the fugitivewageslave For Many Christian Women Raised in ..."
"That's the one. One of the popular sources for Ivermectin for the "grab it and ..."
Mike Meredith MAGA Cultist Pastor Screams at Church ..."
Browse Our Archives
What Are Your Thoughts?leave a comment