Rep. Louie Gohmert: “Christians Are the Only Group in America” That It’s Okay to “Abuse and Misuse” April 13, 2015 Hemant Mehta

Rep. Louie Gohmert: “Christians Are the Only Group in America” That It’s Okay to “Abuse and Misuse”

I would never go so far as to say atheists are the most hated people in America. While we rank lowest in certain polls regarding our electability, keep in mind that there are only a handful of options in the first place. Expand that list and our stock goes up considerably.

But I think it’s safe to say Christians are nowhere near the top of the list when it comes to Most Persecuted Groups in the Country.

Tell that to Rep. Louie Gohmert (R-TX), who made that claim on a recent radio program: 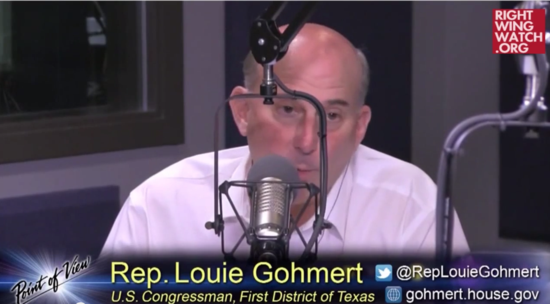 [Pilgrims] came to avoid persecution for being Christians… and that was at the core of so many of the debates, making sure that people could have different denominational beliefs…

… Look where we are today. Now it is, really, Christians are the only group in America that it is politically correct to abuse and misuse.

The only way Gohmert makes any sense here is if his list of groups is limited to Christians and adorable puppies. Then, sure, Christians have it worse. But in any other situation, I promise you there’s an extensive list of minority groups that have it worse.

Keep in mind he’s not even talking about Christians in general. He’s just talking about those who use Christ as a crutch to justify their intolerance and bigotry against LGBT people. He’s upset that people are less likely these days to put up with their bullshit.

Remember: most of the criticism isn’t even aimed at Christians’ beliefs. It’s on how certain Christians treat LGBT individuals when they own a business or make policy decisions. In Gohmert’s mind, anything that prevents him from imposing his religious will on the country is automatically intolerance against Christianity.

April 13, 2015
Atheists Won't Challenge New Jersey Judge's Ruling in Favor of Keeping the Pledge of Allegiance in Schools
Next Post