Last week, I posted about how the Rationalists of East Tennessee put up a billboard in Knoxville, Tennessee:

As far as reactions went, they seemed overwhelmingly positive, even from local Christians. Which is exactly what you’d expect from a harmless message that reads “Don’t believe in God? You’re not alone!”

I guess I spoke too soon. Despite the month-long contract, the billboard was removed from its location earlier this morning, just five days after initially going up: 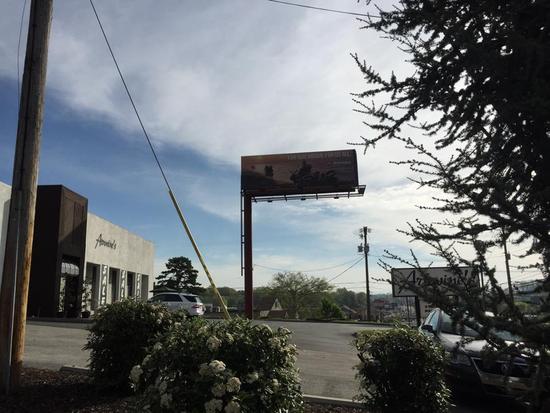 The reason? I’m told by representatives from RET that the owner of the building in that picture, Arnwine’s Home Furnishings, threatened Lamar Advertising with pulling use of the sign on their property if the atheist message stayed up.

Lamar will apparently move the atheist billboard to a new location, but if it just took a little whining to remove it this time, what’s going to stop that from happening again in the new location?

RET’s phone calls to Lamar have gone straight to voicemail. I sent them an email myself. We’ll see what happens.

***Update***: Arnwine’s Home Furnishings told reader Zack that they had nothing to do with this. Rather, the complaint was made by the building’s owner.

(Thanks to Shawnee for the link)

April 13, 2015
How Christians Think They Can Convert Atheists... According to WikiHow
Next Post